The Never Setting Suns are three good friends from Cincinnati, OH. They came together in the summer of 2008 when Corey Larrison and Tyler Griffin started writing noise rock songs and covering Never Ending Math Equation by Modest Mouse on Sunday afternoons in Tyler’s parent’s basement. That August they were asked to play their first show at a local pirate themed laser tag arena for an all-night laser tag party and decided to ask Chris Courts, Corey’s roommate and one of Tyler’s best

The Never Setting Suns are three good friends from Cincinnati, OH. They came together in the summer of 2008 when Corey Larrison and Tyler Griffin started writing noise rock songs and covering Never Ending Math Equation by Modest Mouse on Sunday afternoons in Tyler’s parent’s basement. That August they were asked to play their first show at a local pirate themed laser tag arena for an all-night laser tag party and decided to ask Chris Courts, Corey’s roommate and one of Tyler’s best friends, to pick up the bass for a few songs in the set. They ended up playing a 1am to 6am show, five hours of Neil Young covers, experimental indie rock and a few games of laser tag. That morning, as they finished packing up, they decided to be a band.

With Corey studying Education & Physics at the University of Cincinnati, they began playing local bars and coffee shops around the campus. Soon they were opening up for larger national acts including The Whigs, The Features, Crash Kings and The Toadies. Having adopted a DIY ethic from a love for Ian MacKaye, Fugazi and similar american indie rock groups, the Never Setting Suns decided to invest heavily in their local scene and make their songs available as independently as possible, all the while experimenting with gear and pedal board designs. Alongside of supporting larger national acts, they began playing in smaller rural areas, putting together shows in old warehouses, church gymnasiums, living rooms, art studios and on two occasions, storefronts inside a mall.
Along this diy vein, they recorded their debut self-titled EP in a friend’s one room apartment dubbed Live Love Studios, releasing it on March 6th, 2009. They went on from there to release their first full length album, And Now We’re Not Alone, on March 20th, 2010, recorded at Ultrasuede Studios, formerly the home studio of King Records taken over by John Curley of The Afghan Whigs. The album was recorded and mixed by their friend and engineer Chad Whalbrink who at the time had already recorded a handful of bands, including the Pomegranates, despite having just graduated high school. Of that album, Stanford University’s Alumni Association licensed the song “What the Earth Can’t Hold” for a web series they filmed entitled Golf Cart Confessions.

In 2011 The Never Setting Suns decided to record two songs for a 7” vinyl at Monastery Studio, literally an old monastery turned into a studio, with Rich Hordinski of Over the Rhine. Soon, however, the project escalated into a full-fledged album when Rich was asked to tour with Daniel Martin Moore and offered The Never Setting Suns an interesting opportunity to record with his talented protégé, Matt Moermond, while he was out. They took the opportunity, grabbed some sleeping bags and recorded nine more songs. Most days were spent live tracking songs; however, one day was devoted to recording a grand piano by putting a Japanese guitar plugged into a few delay pedals inside of it and on another day a homeless man walked in on Tyler tracking drums. On January 16th, 2012, The Never Setting Suns released their first single from the upcoming album, “Meet Me There.” They also announced that the album would be called Time & Eternity, available March 24th, 2012.

The Never Setting Suns have released their first single in 8 years!

MidPoint Music Festival have announced an amazing lineup of music on Fountain Square for MidPoint Indie Summer! As part of the PNC Summer Series produced by 3CDC, this free concert series presents regional, national, and international acts for a night of music each Friday...

CityBeat's annual MPMF Indie Summer Series on Fountain Square is looking like a who's who of local music this year with a few favorite nationals sprinkled in! These shows are FREE and take place from 8-11pm every Friday night this summer!  May 31: Pomegranates/Healing Power; The Yugos; The...

Looking for something to do this weekend? Check out our complete calendar of all things music in Cincinnati HERE, or take our word for it at one of these events: Friday, February 15:Tea Leaf Green w/Tumbleweed Wanderers @ 20th Century TheatreOld 97's @ The Southgate House Revival500 Miles To...

The Heights Music Festival was once again a smashing success! The day fest brought us a great group of all-ages performances including an energetic and awesome performance from The Stratfords. Later, at Baba Budans, Dinosaurs & Thunder jammed out grunge style, Those Guys, The Natives, Trademark... 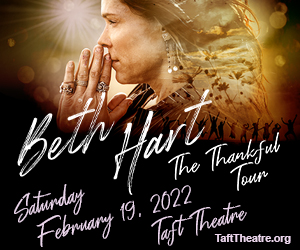