This was easily the largest concert I’ve been to in decades.

And I was there to see a band I first saw about 20 years ago.

They opened for an aggressive, aggressively New Jersey pop punk band called Bigwig at the Boonton Elks Lodge in Boonton, New Jersey. My buddies and I had to sneak in. Maybe we were underage? I honestly don’t remember the reason. I just know we had to find a door into the building and we barely made it inside in time to see My Chemical Romance. 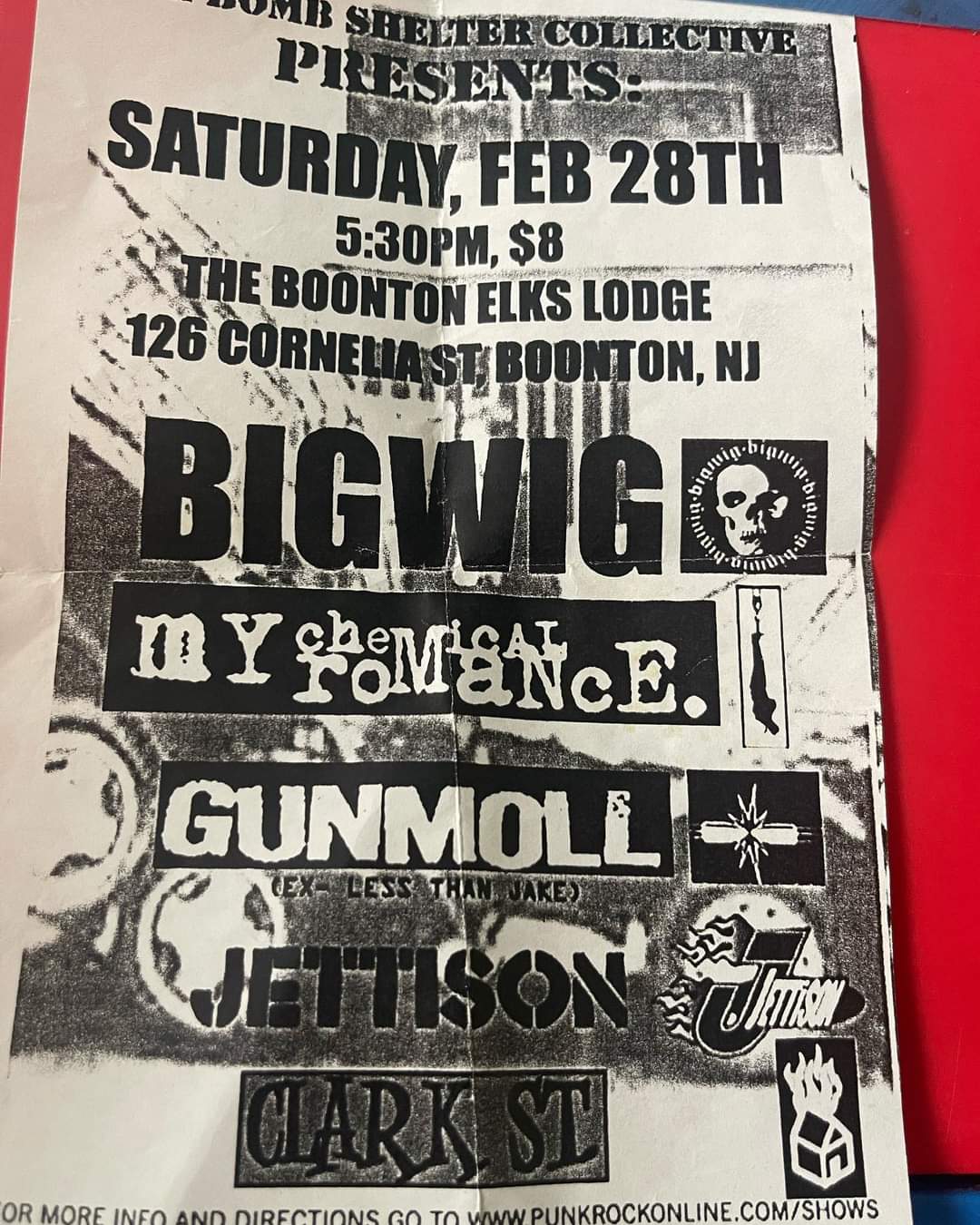 There was a stage, but they played on the floor. Their first album, I Brought You My Bullets, You Brought Me Your Love had been out for about 6 months at this point. They were young, but obviously hungry. They were brash and chaotic, but obviously talented. And I’ll be real honest here - at no point while I was singing along did I expect this would be a band that I would see playing to a sellout crowd at Heritage Bank Center in Cincinnati almost 20 years later.

There’s a rather specific point in their career, though, that I can pinpoint where we (early fans) knew things had changed. Later that year - which is honestly shocking to think about - they played the first of what was meant to be a new annual tradition (at least according to the poster, which I stole from the venue…), the Bullets and Bats Halloween Extravaganza at Club Krome in South Amboy, New Jersey. This was maybe a 500 cap room in the main space, less in the second stage area. I had just fallen head over heels for a newish band called Murder By Death, who released their first album on Eyeballs Records along with My Chemical Romance and others, and I was super jazzed to catch them live, as well. Gerard Way had some guest vocals on their album, so did Geoff Rickley from Thursday, and I was thrilled to see Gerard come out and sing his part when they played the song live. It was a truly great, memorable night of music featuring another new New Jersey band, Senses Fail, who are still at it today, as well as New Jersey legends The Banner, among others.

This would be the last time I would get the chance to see My Chemical Romance play a small venue show. And it was the only Halloween Extravaganza. After this, it wasn’t really an option. The band went on to release Three Cheers For Sweet Revenge (which I happen to be listening to now) the following year and the rest, dear readers, is history. 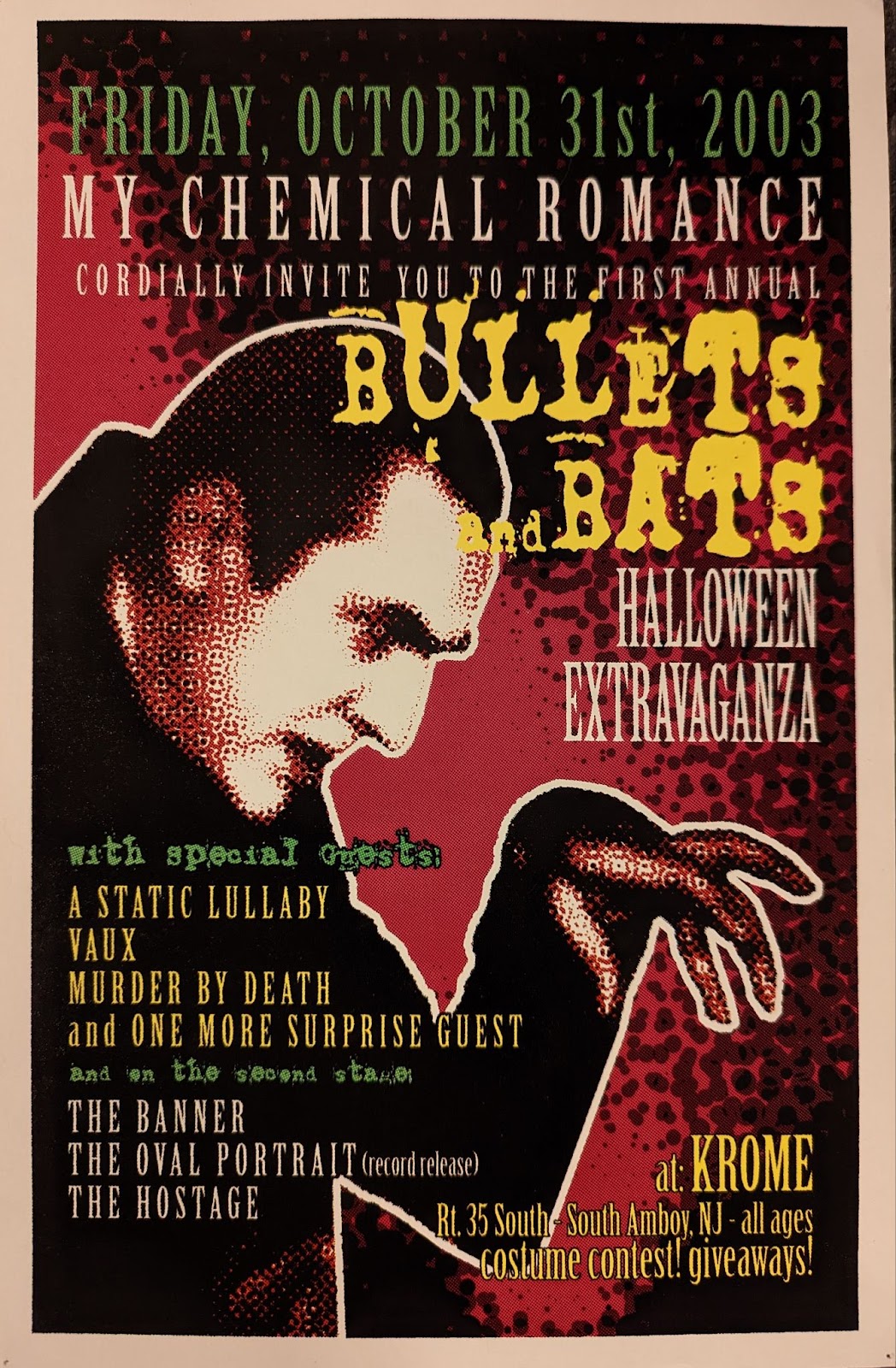 The book I have all my ticket stubs in - at least for a good chunk of time through the early 00’s - has gone missing, but I know that I would go on to see My Chem live during their Black Parade touring cycle (at the TLA in Philly). I’m certain I caught them a few other times over the course of the next few years and at least once while they toured on Three Cheers…

Last night at Heritage Bank Center, though, was a bit of a shock. I’m old. An Elder Emo if there ever was one. I knew this band got big. Huge. I sat down next to another writer, Steven Paugh from CincyGroove.com, and that’s when it dawned on me what I was about to witness. He’s a decade and a half younger than me and never had the opportunity to see the band live before. His excitement and anticipation was palpable - I’m genuinely looking forward to reading his take on the whole thing. We both liked the first band, Dilly Dally, well enough. Strong musically, not so much vocally. He geeked out on Turnstile, though. And I admit, even if I was lukewarm on their last record, they’re great live. Once I understood they were going for a more theatrical take on what Snapcase was doing towards the end of their tenure in the melodic post-hardcore realm, it clicked and I was able to get into it.

I know, thanks to Dan Ozzi’s book, “Sellout,” a stellar look at indie bands who signed to major labels that I can’t recommend strongly enough, My Chemical Romance had rough go of it and slowly receded from the limelight. What I did not know, what I never expected, was to see a crowd like I saw as they performed songs from all 4 albums, along with their only new track available right now, “The Foundations of Decay.” 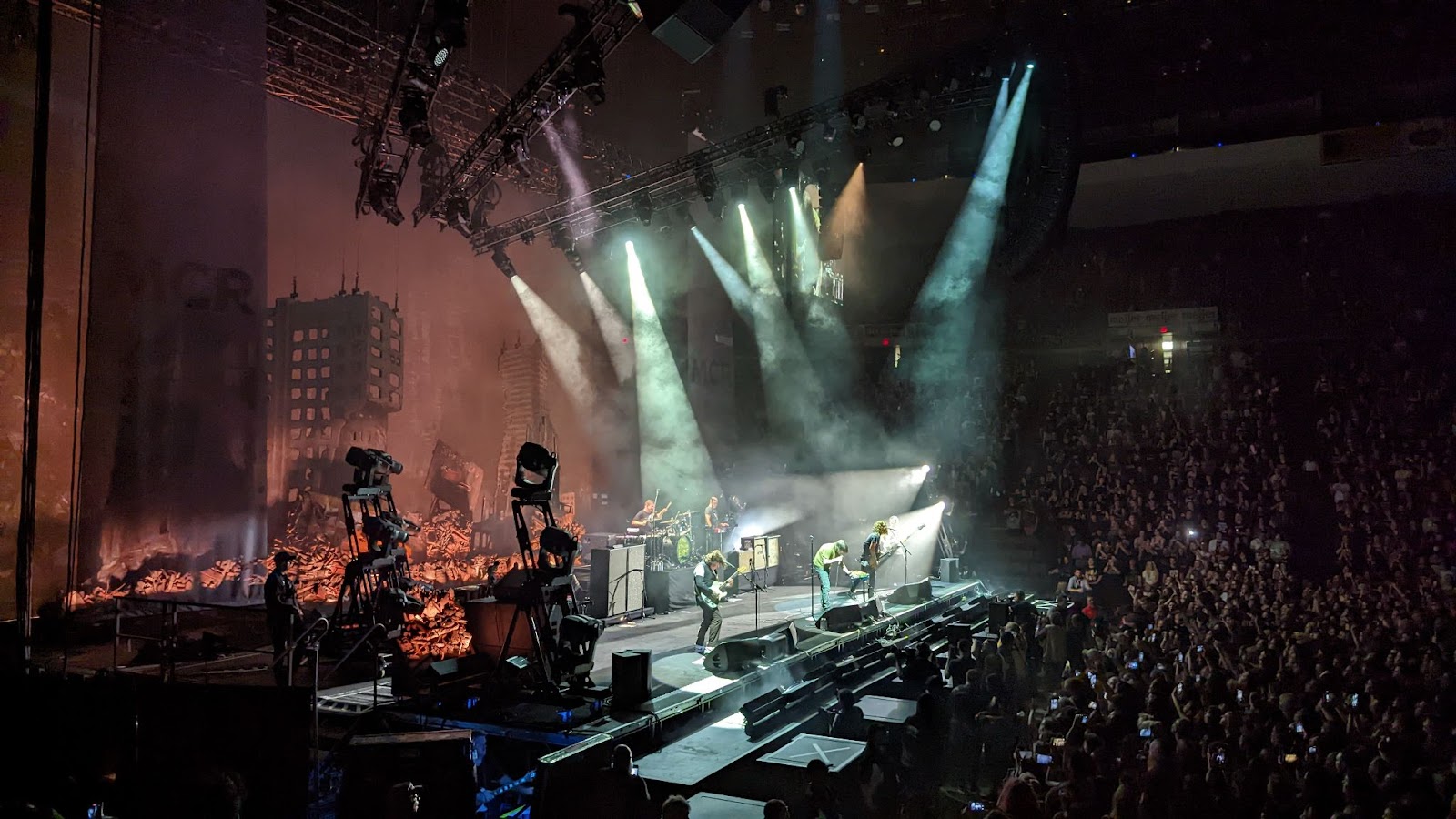 The stage was appropriately designed to reflect as much - post-apocalyptic, off-center, lights hanging precariously. I watched the crowd as they played, catching glimpses of parents and kids, folks my age, folks so much younger, all singing along, all cheering loudly at “the hits” and honestly just as happy with every other song they played. I was surprised they played as much as they did from their first album, even more surprised to see folks half my age singing along.

What I found most fascinating was that the band, who have obviously worked hard to get where they are, who have gone through several iterations as characters in their own stories, costumed and putting on a show, could be so incredibly impactful as just… themselves. Their music was made for arenas. Last night made sense.

Stripped of all the makeup, the matching outfits and brilliantly self-created mythos, each and every song is effective, powerful, meaningful music in and of itself. Sure, half the crowd was decked out in all black, hair dyed shades of pink and red, red and black eyeliner, X’s over their eyes. The aesthetic endures. But goddammit, so does the music. 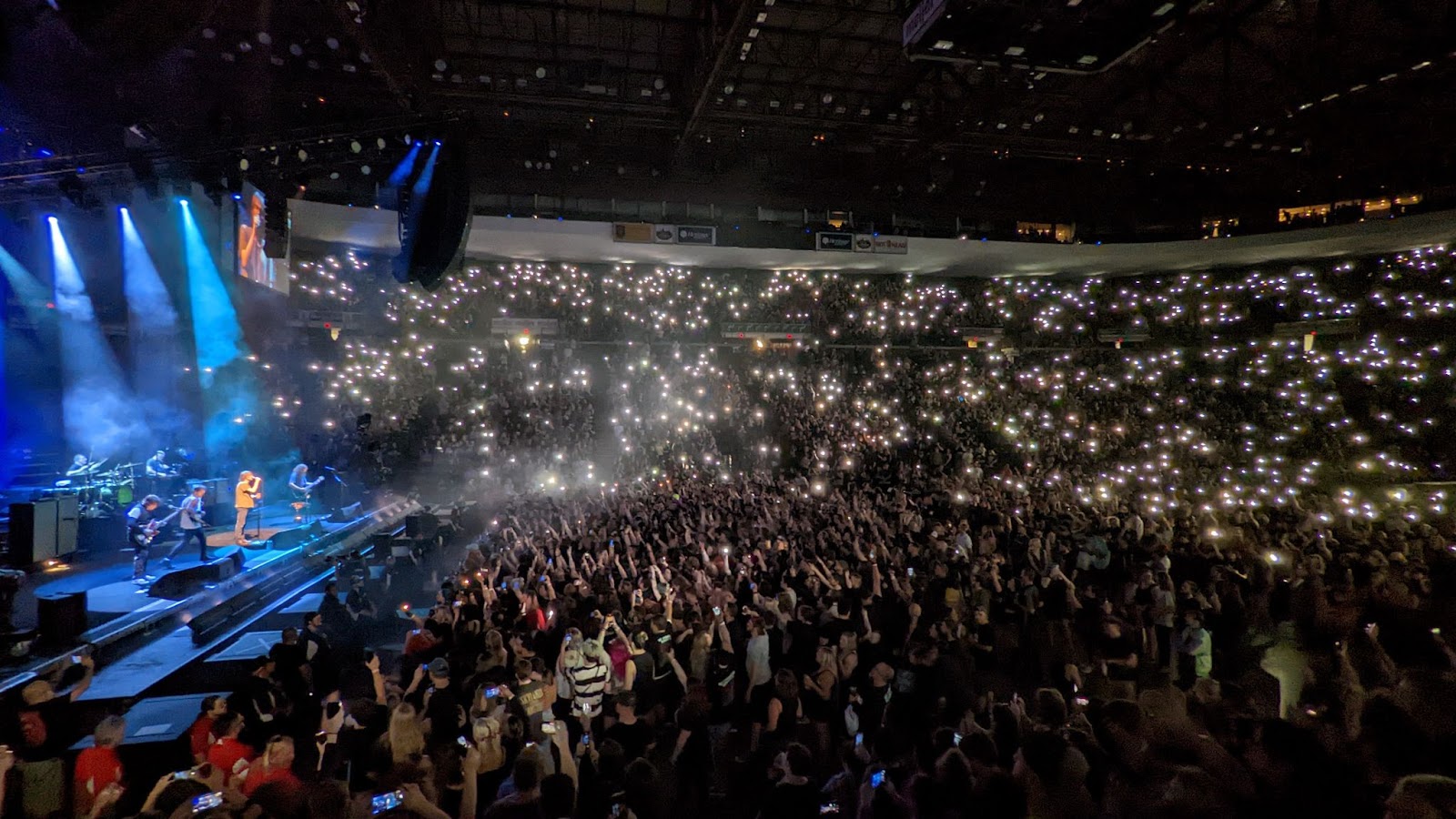 Whatever the next chapter is for My Chemical Romance, I’m ready and willing to listen, watch, and enjoy it - even if it’s no longer music that’s made for me. I love - absolutely and wholeheartedly love - that a band who played a messy set of 5-6 songs on the floor of an Elks Lodge in a small New Jersey town could go on to sell out an arena in Cincinnati 20 years later. Watching this band do what they’ve done, listening to what they’ve created, has been wild and weird and, even though I have nothing to do with it, something I’ve been quietly proud of. So here’s to whatever’s next for the band, and three cheers for ALL of their fans. Last night was special. And I think the band and fans alike realize that.