The return of live music was never going to be the same, or at least to begin, it wouldn’t be. We now live in a different time that requires patience and a little understanding if we are to enjoy the experiences we had before the pandemic.

That being said, anyone who’s ever been to a festival knows there are three guarantees. One, the weather is king and you need to be ready to embrace the elements. Two, lines are always going to be long and should be expected. Let’s be honest. You’ve paid a lot of money to stand in line. And three, prices will be high, that slice of pizza you get, sure it’s about the size of three New York slices, but it will be $15. There is no such thing as cheap when you’re at a music festival unless you prepare accordingly or buy the grilled cheeses from the guy in the parking lot. Those are great too.

With that being said, fans who knew what they were getting into at the Railbird Festival in Lexington, Kentucky, this weekend were treated with maybe one of the best-curated line-ups out this summer. Of course, when you attend a festival the size of Railbird, you often want a cohesive line-up. One that compliments each artist down the schedule, and that is exactly what Railbird offered.

The weekend really began with Margo Price; the Nashville singer-songwriter came out roaring at 4 pm on Saturday. Up to that point, the heat, the lines, and the lack of water were beginning to get to fans, and that feeling was palpable. However, for those at the Elkhorn stage to see Miss Price, you were in for a treat as she and her incredible band provided the proper kick-off of the weekend.

Playing songs off her new album, “That’s How Rumors Get Started,” and offering her new Laurel Canyon-inspired sound. The transition of sound from her Honky Tonk-Outlaw approach was natural, especially with her incredible backing band. No band that weekend could embrace the sound of the ’70s as well as Price and company. So when it came time to pay homage to late-great Charlie Watts of the Rolling Stones, it felt only appropriate that Price play “Dead Flowers.” The song began to unify the crowd and remind everyone why there were there that weekend.

Over on the Limestone stage or the main stage was the critically acclaimed soul-rock-infused giants, Black Pumas. It wasn’t clear how the Black Pumas would embrace being thrown onto the main stages of all major festivals this year. However, seasoned musicians Eric Burton and Adrian Quesada seemed like they had been ready to perform at this level for years. Their Grammy-award-winning hit “Colors” had the entire festival singing along as the heat began to subside, and you began to appreciate the beautiful setting Railbird had created. 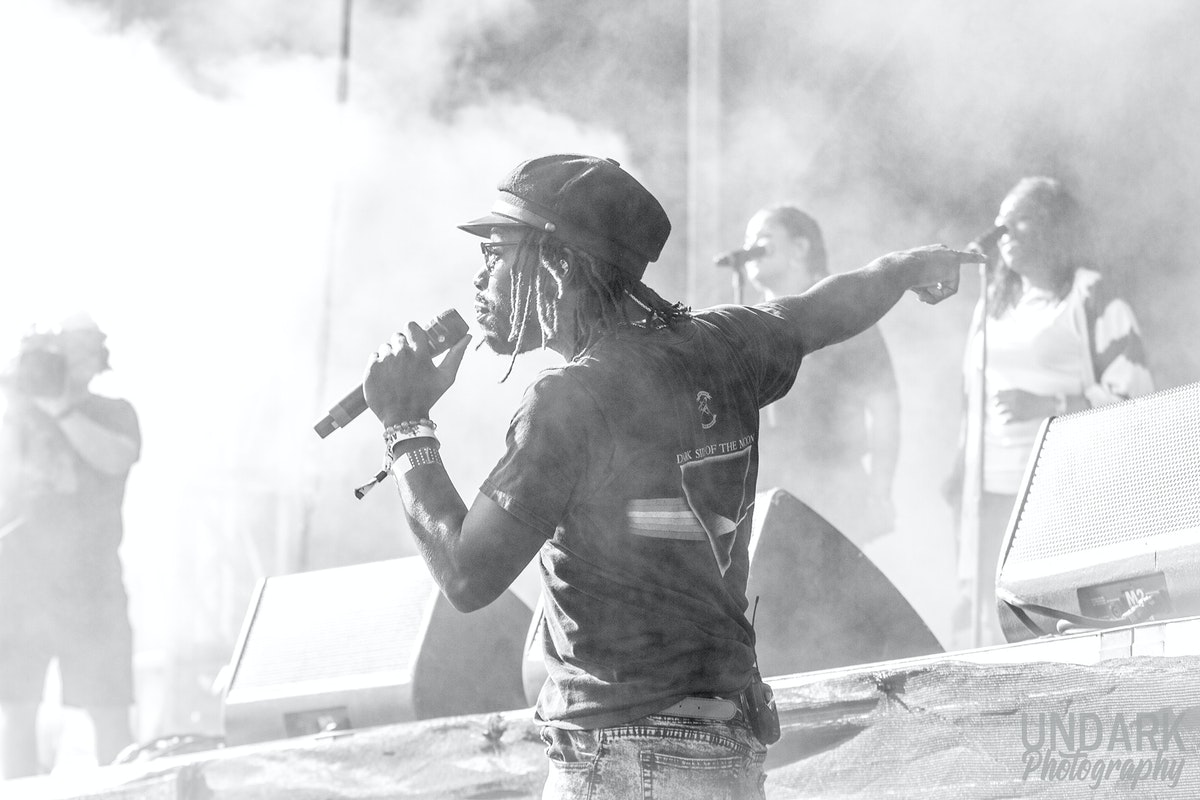 The rolling hills of Keeneland provided amazing soundscapes and created these natural amphitheaters that offered everyone a good seat. The blue skies and white puffy clouds seemed almost too perfect for the setting as Leon Bridges took the stage.

Bridges was where the main stage began to gather some of the largest crowds of the weekend. The Grammy-winning soul and R&B singer-songwriter would be considered the perfect example of Railbird-core. A chill, romanticized southern aesthetic that the festival was clearly going for was perfectly achieved by Bridges’ incredible stage presence and his band’s flawless sound. It cannot be understated how great every stage sounded, clear, crisp, and only accommodated the artists’ performances this weekend. 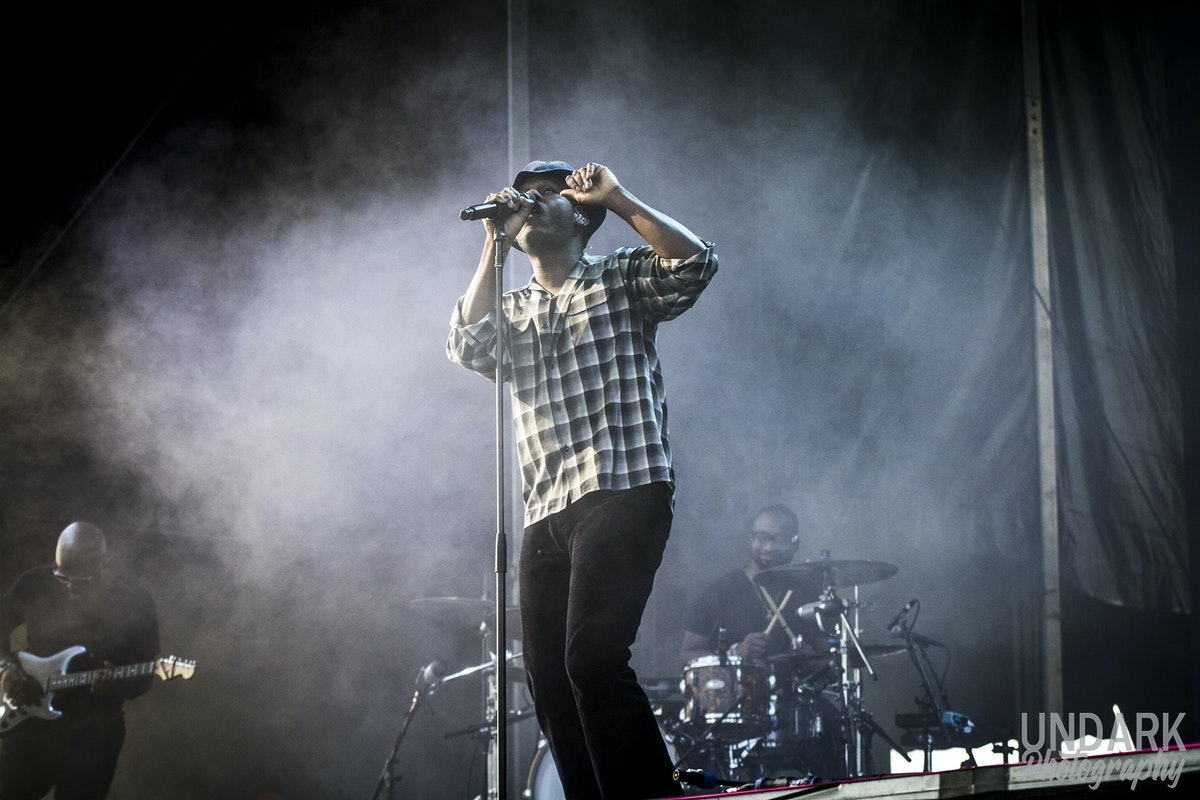 As fans made their way over to one of the biggest acts of the night, Billy Strings, some may have been lucky enough to catch the Briston Maroney set at the Burl stage. The euphoric echo of the indie-folk rock artist was the sound of a bygone era. Sure, a bit commercial. However, you cannot deny that Maroney’s songs will be heard on small stages throughout the country until he hits it big with his ability to write a great pop hit. Maroney’s work is highly recommended if you like the road-tripping sounds of Young the Giant’s early work or a band like Hippo Campus.

Fan’s had been waiting for maybe the most talked-about artist in the festival circuit as well as the jam-band scene all day. The mammoth performer and bluegrass behemoth, Billy Strings, took the stage before his band and issued a disclaimer.

Having seen Strings perform at Legend Valley the month before, I knew that Strings was going to try to jam all of the highs of a Billy Strings show into an hour and fifteen-minute performance. A show that normally takes four hours over two sets and an encore. Well, Strings sure fulfilled his promise, flying through a bluegrass heavy performance, paying homage to where the sound originates. Strings introduced those who weren’t familiar with his live sound right away on “Pretty Daughter,” implementing his influences of Jimi Hendrix and the Grateful Dead to the Bad Liver’s original.

With a light show that challenges Phish’s Chris Kuroda, it was easy to see that Strings’ trajectory is clearly to the top of Festival line-ups and headlining arenas in the near future. The sound to too monstrous to keep hidden on small stages anymore. Only bands like My Morning Jacket and Dave Matthews would match the grandiose performance of Strings that weekend.

As fans moved from Strings to Kentucky Native’s My Morning Jacket, you could not come down from the emotional high, because My Morning Jacket was off and running. Beginning with staples of the band’s catalog, “Victory Dance,” “Off the Record,” “Mahgeetah,” and “Circuital,” fans knew they were getting the best of MMJ.

However, Jim James and company treated this partial hometown crowd to several unheard MMJ songs coming off their upcoming self-titled album “My Morning Jacket.” One of those songs, “Regularly Scheduled Programing,” a song that made complete sense once seen live, will surely become one of the band’s staple live songs as well. A reverb-heavy epic that seems to be a mission statement for the upcoming record.

The first evening finished with MMJ running through some of their most epic songs, “Wordless Chorus,” “Touch Me I’m Going to Scream Pt. 2,” and “One Big Holiday.” 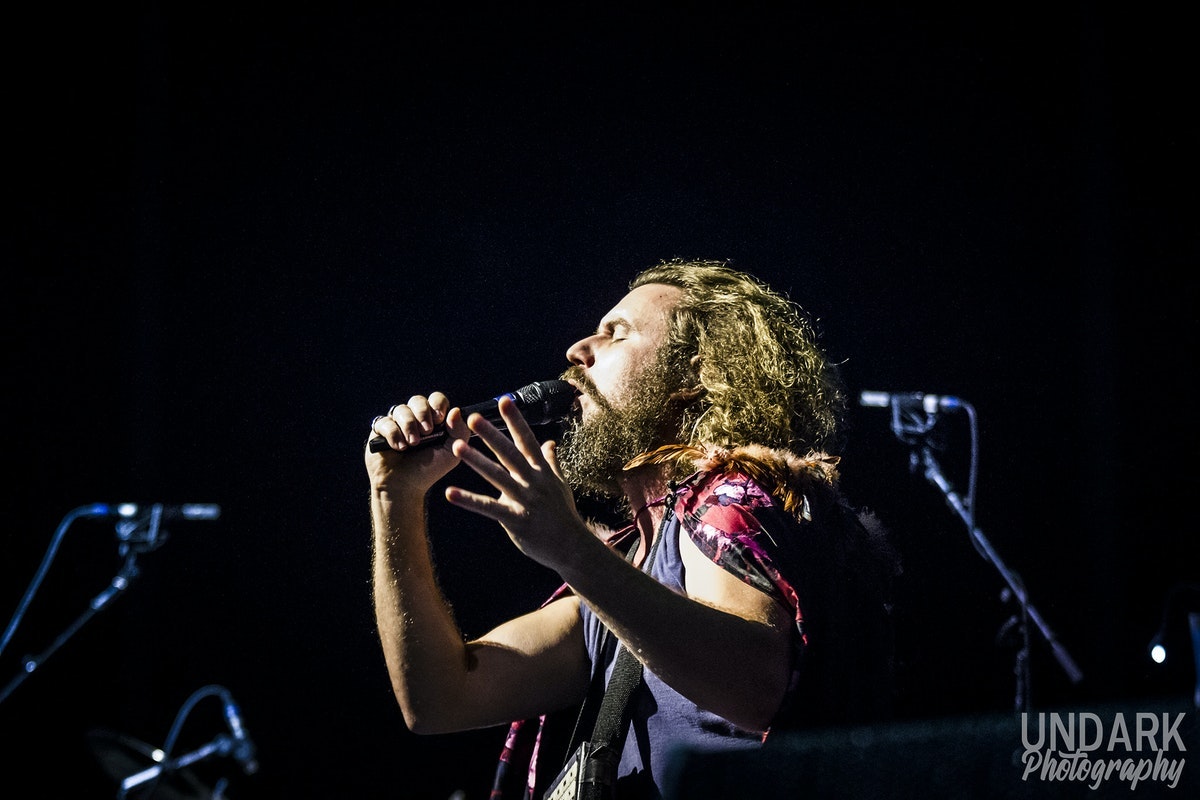 As Sunday began, festival organizers were able to recover and amend some of the mistakes made on the first day. Offering ample amounts of free water to all festival-goers and doubling up on service staff members alleviating some of the line waits.

Always a festival line-up staple, Band of Horses took the stage around 6:30 and seemed elated to be playing in front of fans once again. The often somber and melancholic band came out with smiles and laughter as they shook the frost off their bones, making mistakes along the way but offering fans an unusually upbeat and fun performance.

If one artist should always be expected to play festivals like Railbird, it’s Jason Isbell. The southern rock and country singer-songwriter was joined by his talented backing band the 400 Unit. Isbell is touring for the first time since his 2020 record “Reunions,” a record that leaned more into a Heartland Rock sound and his influences of Bruce Springsteen and Tom Petty. The songs are often melancholy and deeply personal, with Isbell and his performance felt just the same. With a massive sea of people hanging on every lyric of his. 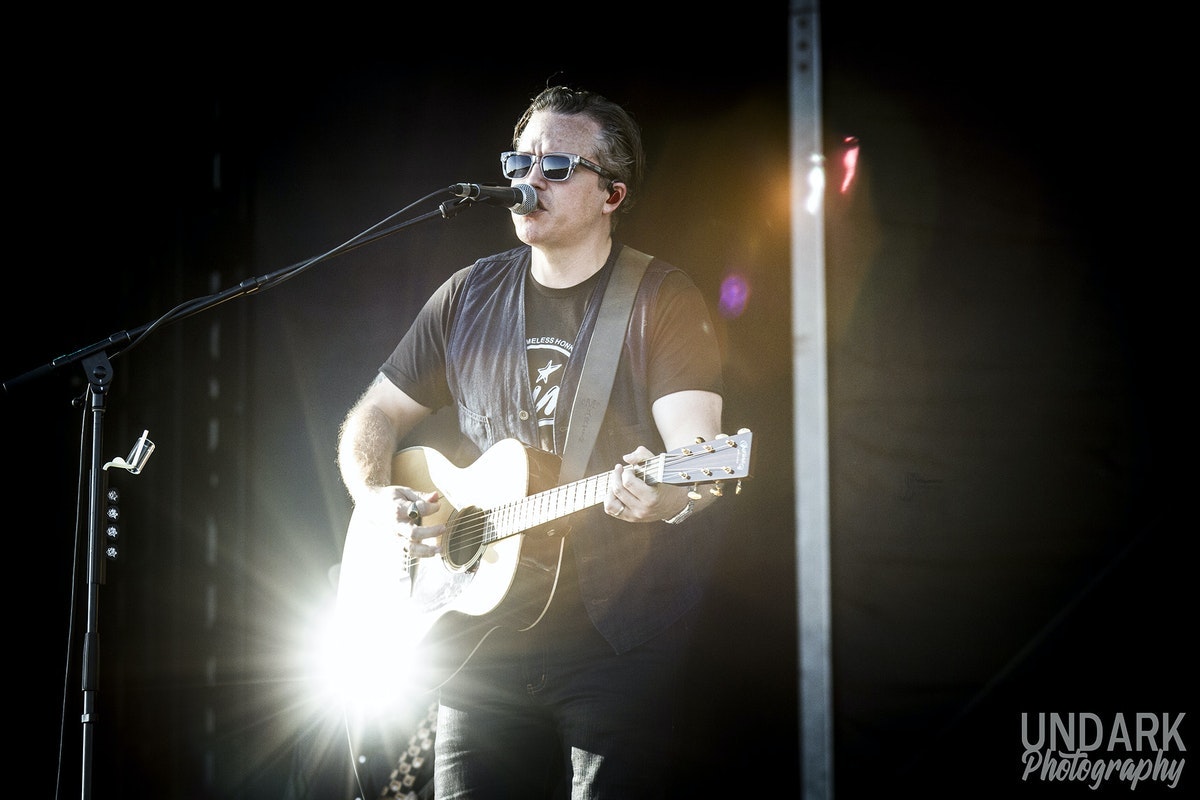 Over at the Elkhorn stage, the psychedelic-vibe trio from Houston, Khruangbin, was taking the stage. Just as the sun began to set, the band eased the audience in with their desert-style Latin-influenced instrumental jams. From “Time (You and I)” of their new record “Mordechai” to staples of their live shows “Maria Tambien.” Personally, this was one of the acts I had higher expectations for, and they fulfilled every one of them with their performance. From their stage presence to their ability to play off one another, all while creating this wholly unique soundscape. If Khruangbin comes to town, it is a must-see event. 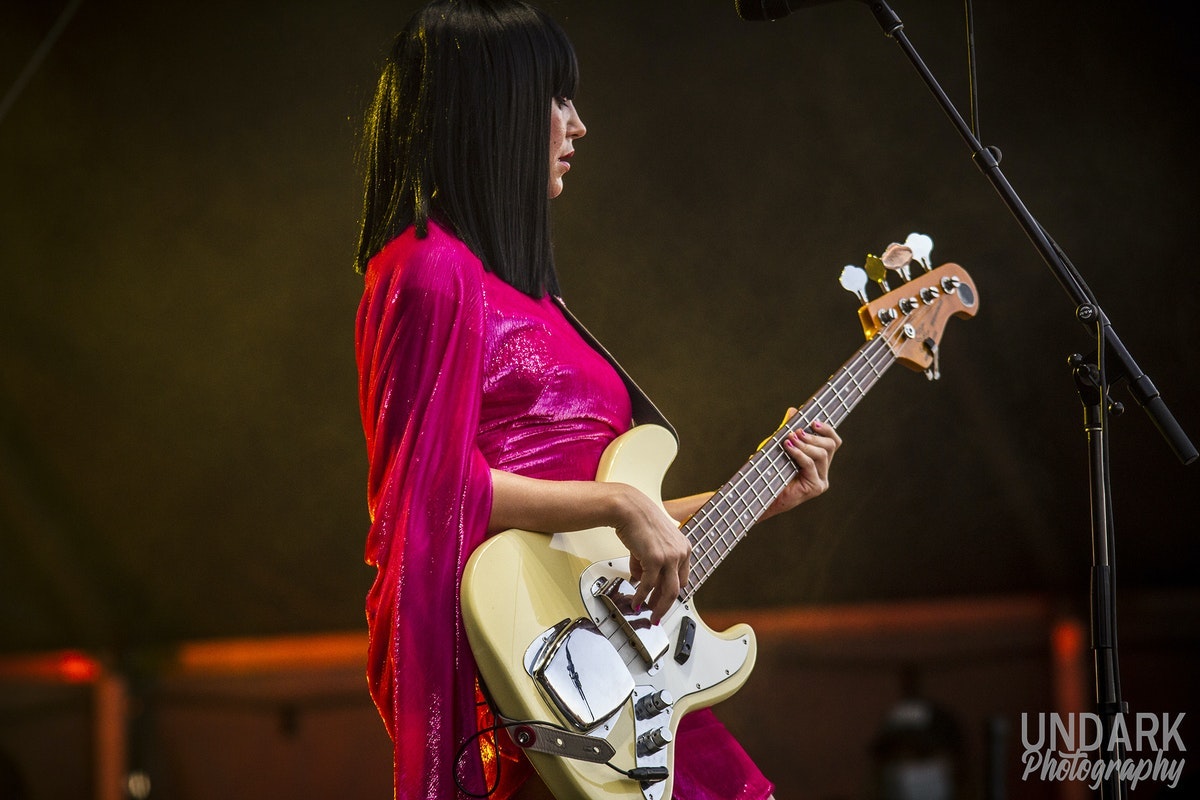 Finally, the weekend finished off with an act that could genuinely command the stage and crowd at Railbird, Dave Matthews Band. To some, a ‘90s eye-roll of a band, to others, their favorite artist who has soundtracked every summer of their lives. Wherever you fell on the spectrum that evening, there was no denying Matthews’s ability to put on an incredible performance. Opening with a live staple, “Two-Step,” to running through a jammed pack performance of some of the band greatest hits, Matthews had the crowd bellowing every song, dancing, and enthralled by jams featuring longtime members Carter Beauford, Tim Reynolds, Rashad Ross, Jeff Coffin, and Stefan Lessard. For me, I fall on the spectrum of die-hard fandom for Dave Matthews and am proud of it. Now approaching having seen the band nearly 20 times, I left thinking this was one of the most unique and memorable performances I’ve seen the band play. There’s no denying the band’s ability to give 100 percent and put on an incredible performance for those who may have been on the fence with Matthews. 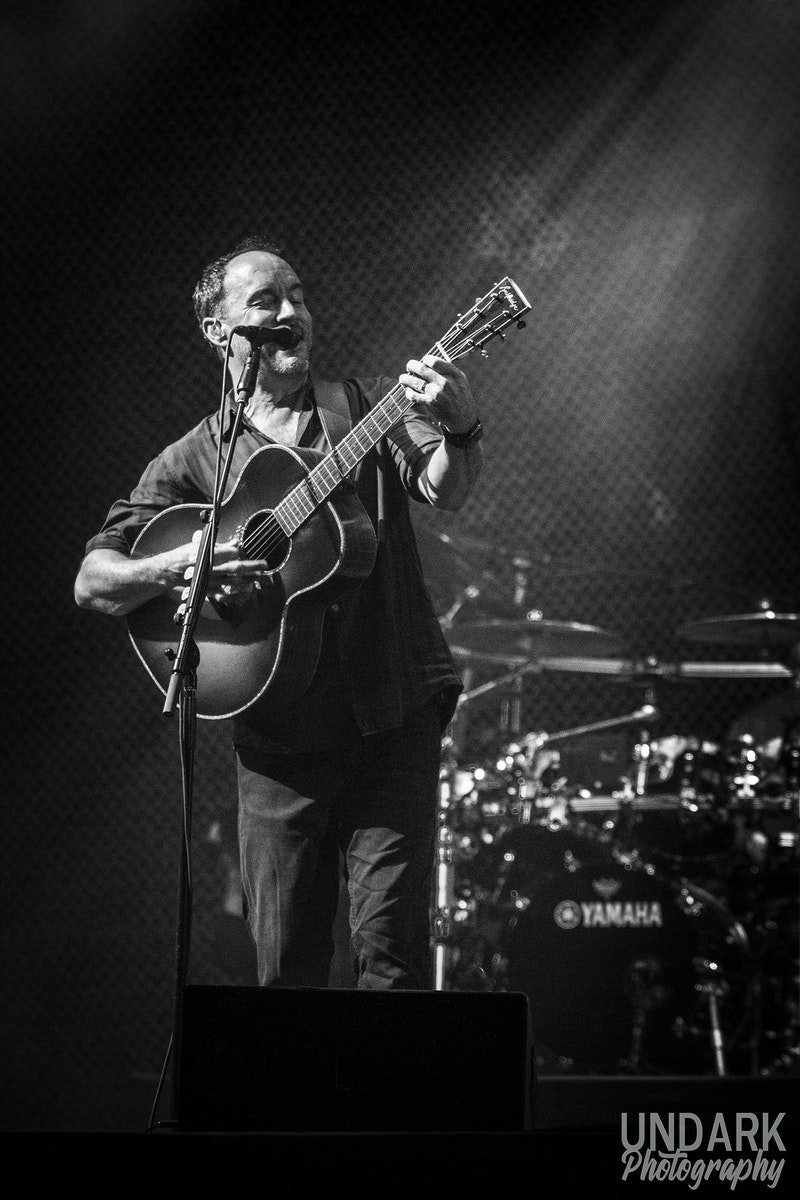