Like many young children of the early eighties, I was (and still am) obsessed with the Transformers. So checking out the Cybertronic Spree show at Bogart’s was a no brainer. A band performing arena rock and hair metal in awesome Transformers costumes? Sign me the hell up. The band bases their look off the 1986 Transformersfilm incorporating several characters from the iconic movie while playing several songs from the soundtrack including Stan Bush’s “Dare” and crowd favorite, “The Touch.”

The group includes Hotrod on vocals and bass, Arcee on the keyboards and vocals, Unicron and a Quintession on guitars, Rumble on the drums and Soundwave hyping up the crowd with his sweet dance moves. It’s refreshing to see that both Autobots and Decepticons can set aside their differences in the name of Rock. Hot Rod is a terrific front man,playing to the crowd and keeping the show rocking and rolling. Vocals are traded off between him and Arcee giving the group a lot of range. Incredibly, the band manages to remain in character throughout the show adding yet another layer of excitement. While they did play songs mostly from the Transformersmovie, a few covers and even some originals where thrown in throughout their set.

Opening with the Transformers cartoon theme song Cybertronic Spree exploded onto the stage with screeching guitars and wailing vocals. The crowd consisting of both 80’s area parents and their children quickly became a sea of pumping fists dressed in pop culture attire happily singing and dancing along to one of their favorite pop culture sensations. The Transformers weren’t the only the fandom represented at the show either as theme songs from Thundercats and Pokemon were played much to the delight and surprise of the crowd. 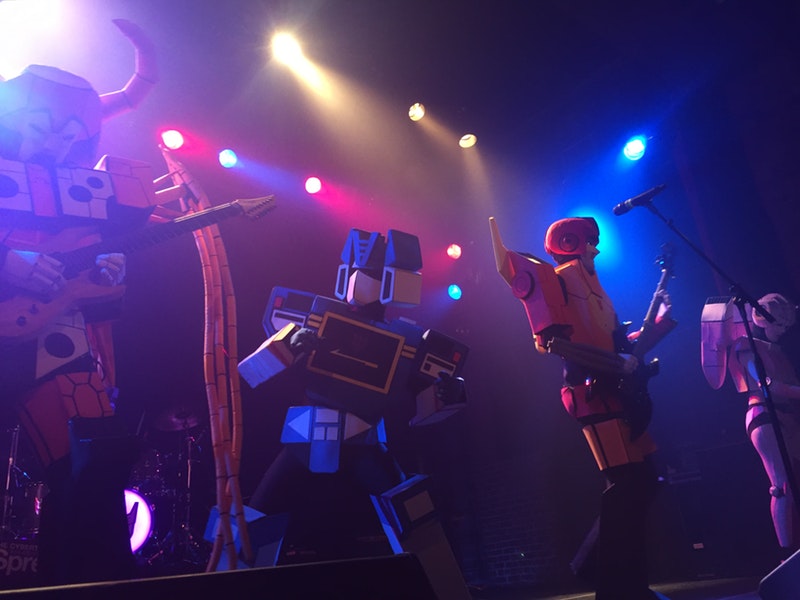 One of the highlights for me was a cover of Led Zeppelin's “Immigrant Song” Arcee took over the vocals for this one and not only nailed the song, she destroyed it. This bot has some serious pipes. The rest of the group weren’t too shabby either, rocking out this classic track causing many fans to throw their fists in the air and give them “the sign of the Unicorn.” Also known as “Devil Horns,” to Earthlings. 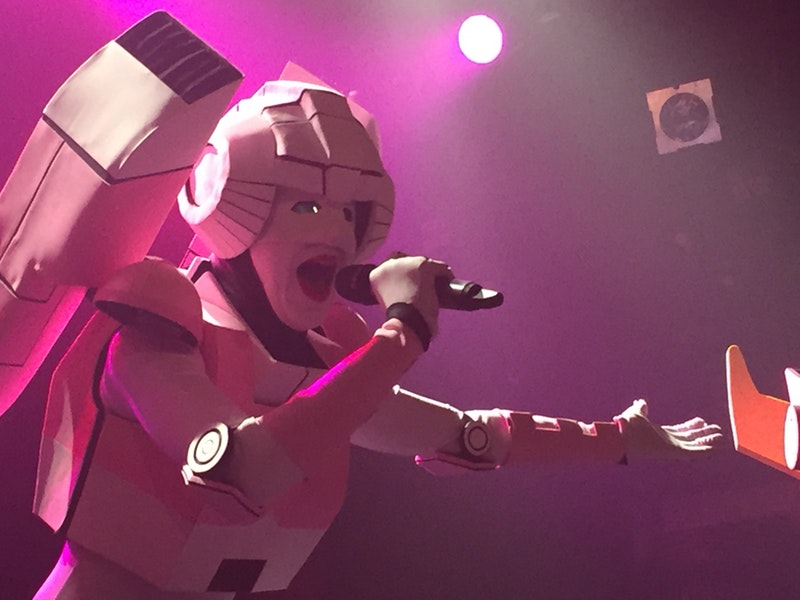 Instead of your normal concert routine of walking of the stage before coming back for an encore, the group powered down, asking for the crowd to cheer for them to power back up and perform a few more songs. It worked and the warriors from the planet Cybertronic played a few more songs for the evening including a surprising (and incredible) cover of Weird Al’s, “Dare to be Stupid.”

If you get a chance to see these Cybertroinans perform in a town near you, don’t pass it up. Hopefully they will be back before too long.

Until all are one.