Megadeth made their epic return to the Queen City on July 2nd and for many fans it was an all-day party with the thrash metal titans. The day started with a pre-concert meet and greet with the band’s frontman Dave Mustaine at Jungle Jim’s in Eastgate.

Now, if you are scratching your head wondering why he would go to a grocery store for a signing rather than a guitar or record store, Mustaine had a new release for fans that didn’t involve music. Dave was there to promote the release of an exclusive Megadeth beer. A Tout Le Monde is a Belgian style ale that is actually quite tasty and the perfect pairing for the summer concert season. 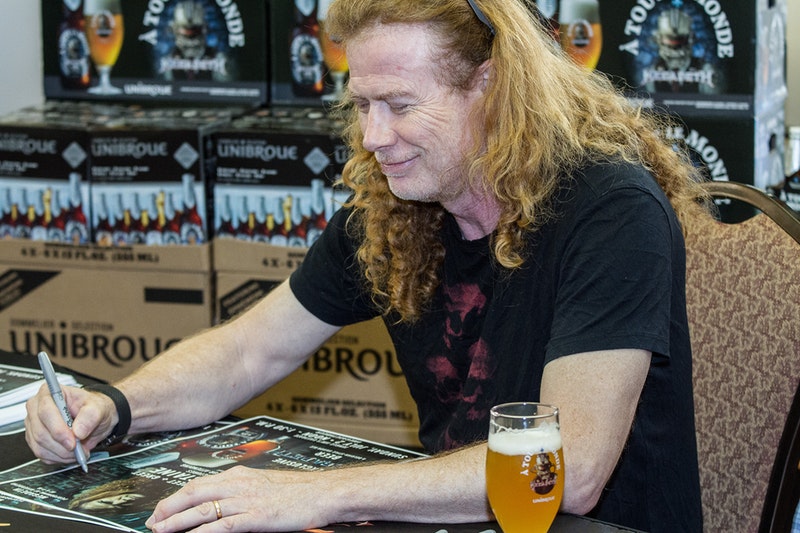 The event started at noon, but many of the fans had started to line up hours earlier, some getting there as early as one in the morning. The excitement was in the air and fans quickly became friends as they waited in line, swapping stories about past tours, favorite songs and their most prized Megadeth collectibles. The meet and greet was only limited to a little over 150 people allowed to meet their hero and just after 10 am the line was to capacity.

At noon, fans were let in and the signing began. For their patience, the first 100 in line received an A Tout Le Monde glass featuring the beer’s logo and band’s mascot, Vic Rattlehead. Fans, however, were a little disappointed that Mustaine was only singing posters that were provided by the event and not fans personal items. The disappointment didn't last long as fans were still enthused to meet the legendary guitar player. You couldn't wipe the smile off some of their faces as they posed for pictures with Mustaine and left with a souvenir suitable for framing.

The PNC Pavilion was rocked with a night of earth shattering thunder as Megadeth stopped in Cincinnati as part of their “Dystopia World Tour.” Opening acts for this show included Lillake, Tesseract and Meshuggah.

Megadeth hit the stage hard and heavy starting with “Hanger 18” and instantly whipping the crowd into a frenzy of moshing, head banging and pumping fists. Despite being in the business for over thirty years, Mustaine and company showed no signs of slowing down as they hammered the crowd with song after song with barley a break in between.

Dave took a moment to greet the crowd in between songs making a humorous comment about their recent long awaited (and long deserved) Grammy win. He didn't spend much time chatting up the crowd preferring to play as much of their back catalog as the night would allow. Fans were treated to such songs as, “She-Wolf”, “A Tout Le Monde”, “Symphony of Destruction”, and “Peace Sells.” With it being the “Dystopia World Tour,” there was a fair share of new material as well. They performed the Grammy award winning, “Dystopia,” along with the hard hitting “The Threat is Real.”

Longtime Megadeth fans were eager to see the band’s newest guitarist, Kiko Loureiro take the stage. Megadeth has had a long list of revolving members and it usually takes time for a new guitarist to win the respect and admiration of the hardcore fans. But if this show was an indication, Loureiro fits the mold just fine. His performance was on point; nailing many of Megadeth’s more difficult solos while adding a little of his own style on top of it.

As the band came out of their encore, Dave told a story about a drunken incident in Ireland that caused him to write Megadeth’s signature song, “Holy Wars....the punishment due.” The crowd still had plenty of energy to rock out to one more song making a perfect ending to a truly epic day.