The southern rock, soul, country, jam band The Revivalists played to a sold out crowd at Covington’s Madison Theater on Tuesday night.  In asking concertgoers where they were from, it became apparent that large contingents of Hamiltonians were showing their support for one of their own: front man David Shaw who heads the New Orleans based septet.  My suspicions were confirmed when Shaw asked the audience “how many folks from Hamilton are here tonight?”

Another question I asked people prior to the concert was “how would you describe The Revivalists?”  Probably the best answer I received was “I wouldn’t.”  Well ok, point taken.  It is hard to pigeonhole the group as they embody multiple genres, but if I were to try to describe them, I’d say The Allman Brothers Band meets The Dave Matthews Band complete with copious amounts of slide guitar solos, a la Duane Allman, and saxophone accompaniments reminiscent of the late LeRoi Moore.

The Revivalists wasted no time getting the crowd dancing and bobbing by opening with ‘Stand Up’ off their most recent LP release Men Amongst Mountains.  They followed that up with the best song of the night; a nearly ten minute soaring version of ‘Catching Fireflies’ where both Rob Ingraham and Ed Williams got to showcase their sax and pedal steel guitar chops, respectively.

Later the band showed off its more rhythm and blues and soul side with ‘Keep Going,’ where Shaw showed off his scatting ability to close out the song, and ‘Need You’ which could have been straight out of the Bill Withers’ collection, and included a great trumpet solo by Michael Girardot.  One surprise track was a cover of the classic ‘Johnny B. Goode.’ The Revivalists ended their set with crowd favorite ‘It Was A Sin.’  After a sustained, thunderous curtain call from the audience, the band obliged by playing their version of love songs.  Why love songs?  Because, as Shaw explained, love is something that “we really, really, really need.”  Amen, brother.

One thing becomes apparent from seeing The Revivalists live: they are destined for much larger venues and very well could be the next great summer jam band.  Looking around the balcony where I was located, the show was much more than a concert, but was mostly a social gathering of friends enjoying their favorite music.  It was similar in feel to the grass section at Riverbend.

View Photos from the show here!

If, like me, you’d like to catch them at an outdoor, summer venue you’re in luck.  Prior to the show, David Shaw announced the lineup for his 3rd Annual ‘Big River Get Down’ located on Dayton Street in downtown Hamilton along the Great Miami River the weekend of September 8 and 9.  The Revivalists headline the festival where Shaw will also appear separately by himself.  Joining the festival this year are The Record Company, Reverend Peyton’s Big Damn Band, The Marcus King Band, Atlas Road Crew, Smooth Hound Smith, and Naughty Professor.  For more information, including tickets, go to the festival’s website at www.bigrivergetdown.com. 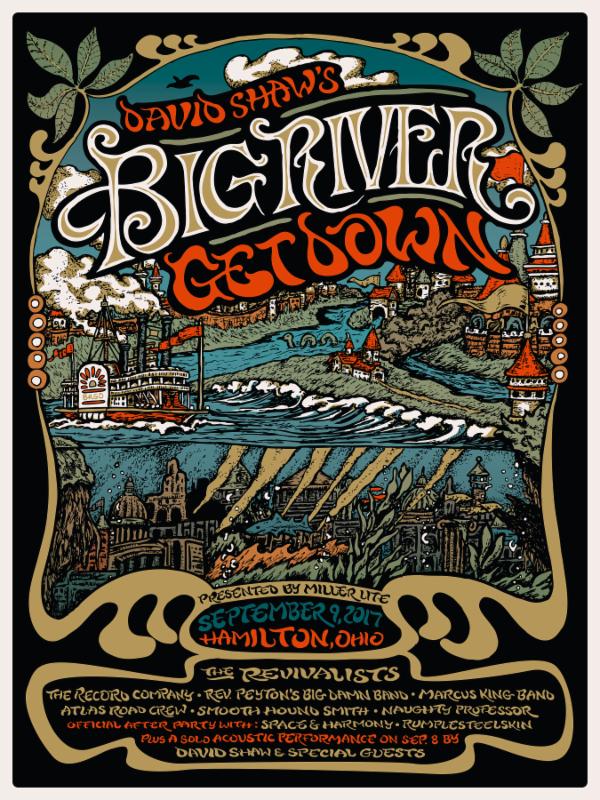 Matt spends his days playing an attorney at a Northern Kentucky law firm, but moonlights at night as a contributor for CincyMusic where he has the privilege of doing two things he's passionate about: listening to great music and writing. His first published short story, 'My Night With Frank,' which focuses on the music of Frank Sinatra, is available on Amazon.  Matt also loves pitbulls, bourbon, and ethnic food.