Two days in to the music week of SXSW and I am already completely winded.  But to say it’s just the music week, would be a major understatement. If you don’t know what SXSW is, well for beginners, the full name is South by Southwest (SXSW for short) and it is so much more than a music festival. It is a two week party inside downtown Austin, where the brightest minds come to network, the most innovative startups come for mentorship, the newest films come to premiere, and most importantly for our sake, the best bands in the world come to perform.

SXSW prides itself on attracting bands from all over the world, from Argentina to Japan.  But there are many notable bands on the lengthy list, such as Spoon, Real Estate, Sleigh Bells, and many more. Yet again, we are only two days into the music week so we’re just getting started. Monday was spent getting acclimated to Austin. It is a very eclectic city, different neighborhoods accentuate each part of downtown.  With each street comes dozens of bars, restaurants and venues that play a part in hosting all the bands. I highlighted every venue that held bands of interest for me. Which brings up a very important piece of advice if you plan on attending SXSW in the future: Plan your trip ahead of time. If you want to see every band on your list, you are going to have to make a schedule mapping out band’s times and the places they’re playing at. One nice thing about this festival, is that that many of these bands will play more than once in a week. Some bands will even play up to 4-5 times in week depending on how much exposure they want to get. So if you miss a band one day, chances are you will get many other opportunities to see them.

As for first day acts, I ventured to the west side of town to a bar-club-outdoor venue called the Mohawk.  Lines were stretching around the block in nearly every direction for people who did not have a badge to get in. Many of the shows are open to the public, you just have wait in line until it venue reaches capacity.

Several great bands filled The Mowhawk, including Chicago rap protégé Noname and Austrian electronic artist SOHN. The performance of the night however, has to go to Sylvan Esso. With their new album on the horizon of releasing, the buzz in the crowd was very noticeable. The venue was packed to see this electro-folk duo, with lines going two blocks over waiting to get in. The show itself, was one of the most high energy shows I’ve ever been a part of. The great thing about SXSW is these venues are small, so the levels of intimacy with energy is magnified. Sylvan Esso played a generous amount of unreleased new material for their upcoming album, and if you are a Sylvan Esso fan, all I have to say is get excited.

Sylvan Esso at The Mowhawk 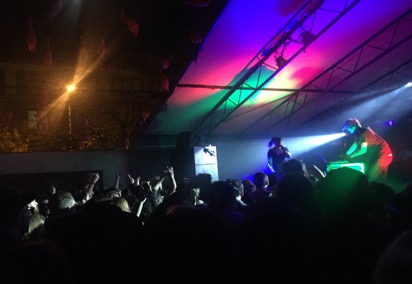 I wanted to see if I could find some more local acts from Cincinnati on Tuesday. I started by seeing Lexington native, Ben Sollee. This was his debut appearance with his new band, Ben Sollee and Kentucky Native, but after talking to Ben after the show, he told me it was his 8th SXSW. Pretty incredible and much deserved after listening to him play. He provides such a great bluegrass sound, gathering influences from many other genres like folk and Latin as well. Be on the lookout for his debut album from his band, he says it will be released within the next couple of months. Later in the night I was able to see Cincinnati’s new pride and joy, Dawg Yawp. Of course the set was incredible, and it was very cool to see a representation of our city’s fantastic music scene in the live music capital of the world. 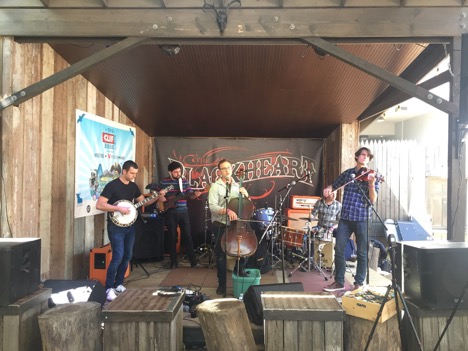 There is still five days of nonstop music left inside SXSW so stay tuned for more updates!