My last two days in Austin were just as musically packed as every day beforehand, as I ran from across every part of town seeing every band of interest I could until the metro would shut down for the night.  I saw easily 10-12 bands both on Friday and Saturday, but of course there were some great acts that just stood out.

I started my day on Thursday seeing Spoon perform their newest album, Hot Thoughts inside the convention center. The set was at 3:00 so it was a fantastic way to kick off the afternoon, while giving me some free time to explore more of the city afterwards. Once the evening grew near, I began to make my way towards the two block radius where mostly every band was playing. White Reaper kicked off my evening by giving me another fantastic show (can’t count the number of times I’ve seen them,) but to many of their first-time concertgoers, they were left stunned at how loud of a show they can play. After their set I, sprinted nearly across town to watch a childhood favorite of mine, Neko Case play inside a Twin Peaks themed bar. To my surprise, this was the longest line I was in to enter the venue for the entire week. The bar was absolutely packed wall-to-wall. I wasn’t able to get much of a good view, but all I needed was her voice. Whether the concert was packed for the Twin Peaks aesthetic or Neko Case’s presence beats me, but if I had to place a bet from what I heard, it was probably because of Neko.

I ended my Friday night by getting front row for the Indie pioneers, Grandaddy. They were there to promote their new album much like the rest of the bands at SXSW, however they didn’t shy away from playing some of their classics like “A.M 180” and “Hewlett’s Daughter.” These men are all in their mid-late forties but they could rock out better than most dudes in their early twenties today. 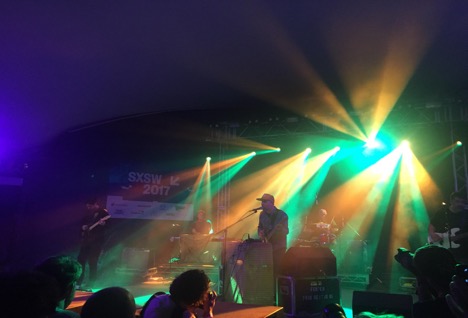 I wanted to dedicate my last day at SXSW to catch some of the last sets of some Cincinnati bands in Austin.  Two local bands played at one venue, Swan Dive in the evening to my great satisfaction knowing that I wouldn’t have to run across town again. The first Cincy band to take the stage was Frontier Folk Nebraska. I have always heard great things about this band but never had the chance to see them. Of course I was blown away and again, incredibly proud how these guys are repping our music scene. They played old favorites all the way up to playing some singles off their new EP, Warpig which is set to release on March 27th.  The second band to play was Dawg Yawp, finishing their last set of 3 in Austin. Both bands drew such impressive crowds, which sets the credence that Austin really does appreciate good music.

By Sunday I was quite ready to return back to town. SXSW had truly thrown me off guard by how much it really offers in one week. It shows you what the city of Austin can offer in a microcosm of time. The music, film, and food are presented at such a high caliber that it truly can overwhelm you if you aren’t prepared, but it is the best kind of overwhelming feeling. I am already planning on the next time I can go back to this incredible festival and city, and you should too.