If you ever had any uneasy opinions about Detroit in the past, it’s about time you put those to rest. And it’s all due to Mo Pop festival held in West RiverFront Park, Detroit. In its fourth year, Mo Pop is still a relatively young festival, however due to its quality-over-quantity lineups and impressive interactive villages, Mo Pop has established itself as one of the must see festivals in the Midwest. The festival is easily one of the most ergonomic in the country as well. They pride themselves over having only two stages as well as creating nonconflicting set times so that nobody in attendance has to sacrifice seeing one act for another. These two stages are also within 500 yards of each other so there is no long distance sprinting from one act to the other.

As I walked into the park, I could hear a band covering “Paranoid Android” by Radiohead and they weren’t just covering it they were owning it. I looked down at my festival schedule to see who was already playing. My jaw dropped when I saw these were high school kids on a mini-stage called the “School of Rock Stage” which featured the best of the best in young rock talent across the country. It only got more impressive once I walked through the craft villages. To start, a large tent greeted you that featuring a massive retro arcade, free water, and air conditioned which proved to be incredibly vital in 90 degree temperatures beating on attendees throughout the day.  As I made my way through the park I was constantly surrounded by local food trucks of every type of cuisine possible, from vegan burgers to pitas. An extensive biergarten with dozens of local craft beers was placed at the center of the park and was certainly the center of attention between shows.

With just under 25 bands performing throughout the two days, it sounds a bit uncanny to mention Mo Pop in the conversation with some of the premier festivals in the Midwest, but from act one to the headliner there isn’t an unrecognizable band on the list.  Day 1 featured extensive mix of artists where it seemed like no two bands shared the same genre. The four-piece psychedelia group, Quilt started Mo Pop with a punctual set in front of an impressive crowd for how early their set time was. And Slacker-punk heartthrobs, Twin Peaks won the crowd over with their catchy hooks and sing along choruses. As the day went on, the general vibe of Mo Pop became more poppy, but in no way did it become duller. The Michigan native, Børns had a performance that never lost energy from start to finish while making it clear that its biggest fans were based in Detroit. 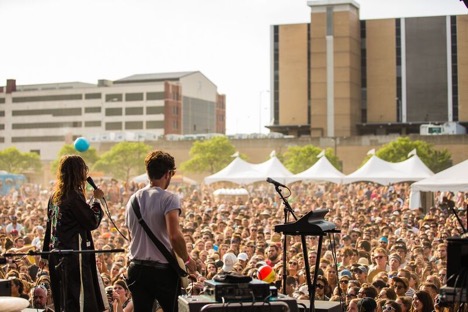 It was nice to mellow out and catch your breath to the trippy yet smooth, Glass Animals. The rest was much needed for one of the most talked about live performances in recent years, HAIM. You wonder how they can play every concert with the same level of energy as they do. It seems like every concert they play is their first stop on tour. Playing old, new, and even a Prince cover(!!!) With no surprise, HAIM was definitely the standout performance of Day 1. But it was G-Eazy who brought Day 1 to a close delivering an exceptionally energetic and engaging show to all those who patiently waited to see him. He expressed his unconditional love for Detroit while also paying homage to his idol, and rightfully so, Eminem, who grew up less than ten miles from where Mo Pop was being held. 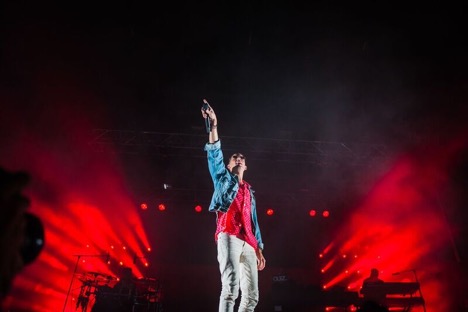 It was hard to point a finger at which day was better because both delivered the same amount of star power.  Some of the early acts on the second day featured many young and up-and-coming acts like Raury and Lewis Del Mar. The kingpins of indie started to show out in the afternoon with a both trippy and quite hilarious set by Mac DeMarco.  Much like the Glass Animals show from the day before, a solo acoustic set from Father John Misty allowed everyone to regain some energy for the forthcoming Matt and Kim set. Unfortunately the set was cut early due to a power malfunction that was caused because they honestly went too hard. Not many other bands can say that. Despite the malfunction and the shortened set time, Matt and Kim did what they do best, make crowds go absolutely crazy. 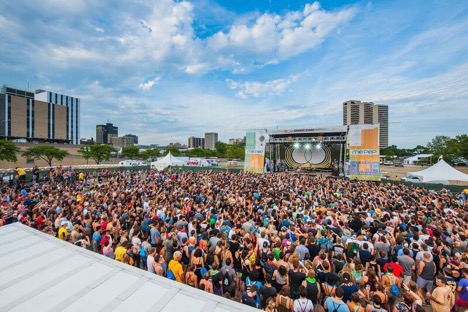 Mo Pop ended in the most yin-yang type of way with the last two acts being The Head and the Heart and M83 as the headliner. The Head and the Heart dug deep into their folk roots delivering a show that felt very intimate without losing any sort of vitality. It was M83 that followed to close out Mo Pop, and the dreamy electronic group led by Anthony Gonzalez closed it out the most awe-inspiring of fashions. It was part light show and part synthesizer showcase. If you’re a fan of M83, you know that they don’t stop at synths either. Saxophones, a Slap Bass, and even a Theremin added layers upon layers to their already deep sound.  They played many hits from their newest album, Junk, and even brought out the album’s featurette vocalist, Mai Lan to perform the single, “Go!” 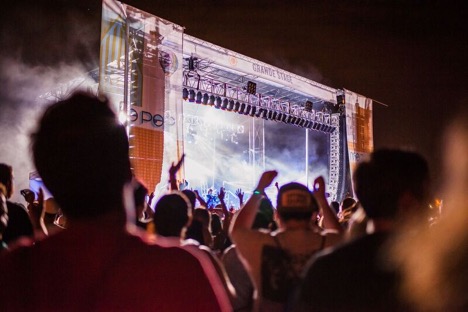 Watching M83 play behind the illuminated Detroit skyline, I wondered why not many other people from outside Detroit knew about this charming festival. The people we’re incredibly friendly and outgoing. The assorted cuisine scattered throughout the festival grounds were delicious. And most importantly, Detroit knows good music.  With two-day passes starting at under $90, it’s hard to say no to it. So if you’re planning any festival road trips next summer, Mo Pop should near the top of your list.