Arnold’s Bar & Grill is Cincinnati’s oldest bar. Upon stepping inside Arnold’s, you can feel the history. The artwork that fills the walls tells the story of the past generations that have passed through.

In 1861, Simon Arnold opened the tavern and during prohibition, a kitchen was added and Arnold’s was converted into a café. Legend has it that the bathtub on the second floor was used for bathtub gin and booze was hidden in false bottom floorboards and walls, which are still accessible today. The bathtub became somewhat notorious and remains today (without the gin). 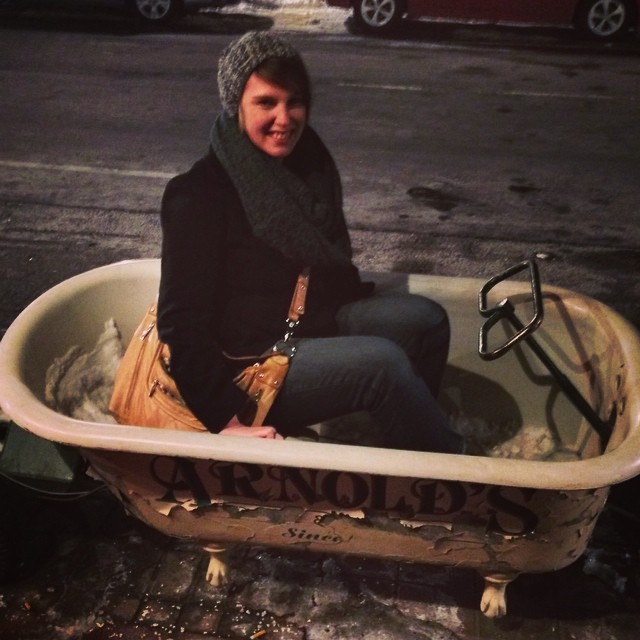 Three generations of the Arnold family lived upstairs and operated Arnold's for ninety-eight years. Since then Arnold's has had only four other owners. The current owner, Ronda Breeden purchased the bar from her long time employer Jim Tarbell and is continuing to run Arnold's as a family business.

Arnold’s owner, Ronda Breeden was gracious enough to sit down with us to chat about what makes Arnold’s an absolute institution in Cincinnati.

CincyMusic.com: What makes Arnold’s different than the rest of the venues in Cincinnati?
Ronda Breeden: We go outside the box and the musicians feel like part of the operation. Not just come in, set up and leave. We promote them, we are proud of them and we want them to feel that way.  We also feed them which makes them feel more a part of us. Plus... Our stage is an old school, general store style front porch, outdoors, in the middle of the central business district of a major city featuring Old-Time, Americana, Bluegrass, Jazz and Folk. It's a pretty special space, I wouldn't imagine there is any place else like it, probably anywhere. 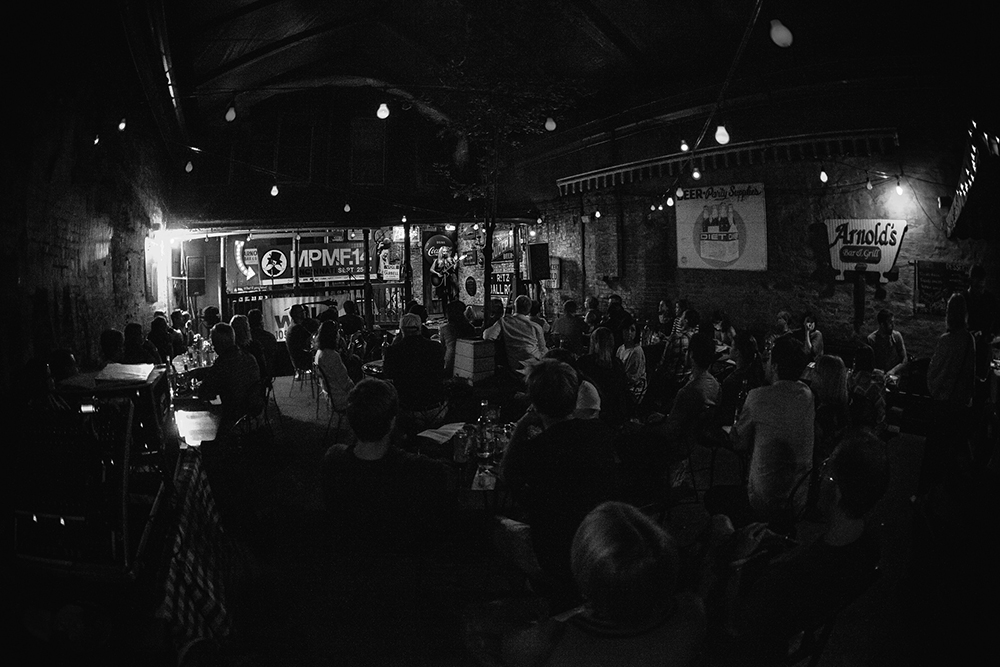 CM: What events each year does Arnold’s get excited about?
RB: Hah, we have so many we can't even keep track. Since we are considered to be such a part of the fabric of the city, if there is something going on, we are expected to do something for it. We of course love that and are happy to oblige. From Bockfest, to our Local Local Local event, to Midpoint Music Festival, to Cincinnati Beer Week, St Patrick's Day, Opening Day and everything in between. Events here have become their own full time job.

Arnold's is so many different things to different people. To some it's an event space, to others it's a restaurant, or it's a bar, or it's a music venue, a wedding venue, a place to go before the ball game, a place to catch a play at Christmas time. A big part of our success over the years is throwing events when there is something going on and making up events when there isn't.

CM: Being the oldest bar in Cincinnati, do you feel the need to keep up with other venues or keep the good thing you have going?
RB: A little of both. We don't actually compete with other venues, we want them to succeed as much as we do. What's good for the community is good for all of us. With so many awesome places opening all around us, it just pushes us to be more awesome too. We compete with ourselves, always trying to outdo our last epic event. We want the atmosphere, the live music and the building to be like taking a step into the past all while staying current with menu changes, doing our best to keep up on all the best new beers and breweries and following the latest craft cocktail trends.

CM: How did Arnold’s get chosen to be in Carol?
RB: Arnold's has been fortunate to be chosen to be part of several movies and TV shows over the last couple of years. For Carol, they picked great locations, that film was so artistic and beautifully shot, Todd Haynes and Ed Lackman knew what they saw the moment they walked into Arnold's. They actually had to do very little to get the bar to look of the era. So I am pretty sure that was a good selling point for them. They did put up some red and white checked curtains in our middle room. They looked so good that we decided to go ahead and keep them up permanently.

Few people know that Harry's Law was just going to use the outside of Arnold's until production came in to have lunch.  Once they saw the inside they knew they had to replicate the bar.  Most recently, Bruce Willis, Christopher Meloni and Adrian Grenier were using our courtyard to shoot a scene for the movie Mauraders. That's really all we can say on that one but look for it this summer.

Oh, and we can’t help but point out our favorite Celebrity regular, Emilio Estevez. He is a really big, big fan of Americana music and stops in from time to time to check it out. Especially if the band Clusterpluck is playing here.

CM: What is the favorite dish/drink among the staff?
RB: I would say the two most popular things for our staff would be The Hamburger and the Greek Spaghetti. Hamburgers because, well everyone loves Hamburgers and the Greek Spaghetti is our signature dish. It's been on the menu since 1957 and I dare to imagine just how many pounds of that has been eaten by the staff over the last 58 years. I would say that hands down the staff’s favorite cocktail would be The Diebold Fashioned. We won't say it's the best Old Fashioned in the city but it's a strong contender. It is our bartender Pam Diebold's take on an old stand by. She takes Old Overholt Rye and lightly infuses it with cherries, briefly barrel ages it and then adds Peychaud's Bitters, house-made Bourbon Vanilla Sugar, and a giant Blood Orange Ice Cube. For beer, Christian Moerlein also makes us our own Beer: Arnold's 1861 Porter. So that would be our most recommended brew.

CM: What are some events at Arnold’s we can look forward to this summer?
RB: Summer is always an amazing time to catch live music at Arnold's. The top is off in the courtyard and it's like getting your own front porch concert every night of the week. For specific events we are looking forward to, we have a Citra Hop Festival coming up in June. We held on to 5 different high ABV Christmas beers and plan on having a Christmas in July event. One of those beers is a rare Bourbon Barrel Aged 12 Dogs of Christmas from Thirsty Dog Brewery. In September we will of course participate in MPMF 2016 and who knows, I bet there are a few surprise events in there as well.

Check out the concert calendar at Arnold's right here!

Cincinnati is brimming over with amazing places to see live music. Every pocket within our city has a number of places to check out your next favorite band. Within the month of April, CincyMusic.com will be featuring Neighborhood Venues in Cincinnati. These venues include; a past brothel, the home of the amazing open mic night (and a darn good pretzel), an old school jazz joint, a west side gem, the venue that was once underwater, where to go to worship music, and the go-to spot in OTR for breaking bands.

Stay tuned to CincyMusic.com for our Features on your favorite neighborhood venues this month!

Do you love Arnold’s as much as we do? Enter to win a copy of the recently released Arnold’s Bootleggers and Hustlers Volume Two album as well as an Arnold’s t-shirt HERE!

The Folk School Coffee Parlor is located in historic Ludlow, Kentucky a short ride from Northern Kentucky, the west side of Cincinnati, and downtown Cincinnati as well. It is owned and operated by husband and wife Mary Williams and Matt “Catfish” Williams, along with friends Casey...

It’s like church.  Every Sunday, people from all walks of life crowd into a West Covington bar to break bread, enjoy some spirits, and come together over a shared love of music.  Like church, it’s not the building that makes the congregation a community, but the common ground...

When The Southgate House Revival opened in Newport on October 12, 2012, it was not just the soul of one of Cincinnati’s greatest musical institutions that found new life. The red brick building, which celebrates its sesquicentennial this year, dates to 1866, and was home to Grace Methodist...

This 20th century gastropub in Northside is not just known for their mixology and smoked wings, but is also a great place for bands to come and perform.  Jon Weiner and Stuart MacKenzie first opened Northside Yacht Club, formally known as Mayday, at the end of the summer of 2015 and been busy...

Schwartz’s Point, you have driven by it a thousand times. That triangular building right smack dab in the middle of the five way stop as you travel up Vine St on the corner of West McMicken. The Jazz club is, according to their website, “A longtime labor of love of Jazz pianist Ed Moss,...