While the Nation had their eyes on the Queen City this Tuesday and tens of thousands watched a game of all-stars at Great American Ballpark, A local music advocate and friend of CincyMusic.com was filling your ears with the sounds of the city & you probably didn’t even realize it!

Many of our readers may realize that Aaron Sharpe of WNKU is also the Reds DJ at Great American Ballpark. He is the man that captures the moment by playing relevant music during every home game. He does that by playing Billy Joel’s “We didn’t start the fire” when the smokestacks at GABP caught on fire, and by playing the ‘HallelujahChorus’ from Handel’s “Messiah” when Joey Votto sent a 2-2 fastball over the wall to take the win after an exhausting game in the rain.

Well, my friends, he did it again all weekend long and you probably didn’t even realize it. He says it best, so straight from the horses mouth:

“One of the highlights of my job as Reds DJ is showcasing the music of Cincinnati, KY, and Ohio at GABP, right down to our game-winning song by Foxy Shazam. Here is the playlist of music that I played in the ball park between gates opening and pre game ceremonies of the Home Run Derby and ASG. With just one exception, every song was either about Cincinnati or Ohio or by an artist from Cincinnati or Ohio. Obviously, I barely scratched the surface and wish I would have had more time to play so many more deserving local acts, but it was fun to be able to do even this much. My thanks to CincyMusic.com for the assist is getting some of this music together. Not on this list is the Seedy Seeds, whose "Oh, Cincinnati" was the last song played in the ball park as people were exiting last night.”

So, there you have it.. Cincinnati’s heart and soul was poured in to this event from the players on the field, to the city and government bending over backwards to make a good impression, to the businesses and corporate citizens celebrating the city with art and selfless events, and even the music that was being played over the loudspeakers by local musicians putting their all in to their craft. We all came together for a few days, even after a hard couple weeks, and showed the rest of the world our soul. Nice touch, Aaron! It is fantastic to know that we have such great allies of local music in this city. Here is that playlist:

“Sidekick” by Walk The Moon
“Ohio” by The Black Keys
“Love Train” by The O’Jays
“Bethel, OH” by 500 Miles To Memphis
“Don’t Run” by Bad Veins
“Everybody, Come Outside!” by Pomegranates
“Hooray for the Cincinnati Reds” by Cincinnati Pops Orchestra & Erich Kunzel
“Breakdown Dead Ahead” by Boz Scaggs
“I Need You” by Public
“The Cincinnati Kid” by Ray Charles
“To The Lightning” by Wussy
“Susie Cincinnati” by The Beach Boys
“Blue on Black” by Kenny Wayne Sheppard Band
“Fear is Never Boring” by The Raisins
“Queen City Rag” by Jake Speed & The Freddies
“My City Was Gone” by The Pretenders
“Hello Queen City” by HereComeHere
“O-H-I-O” by Ohio Players
“Shakedown Street” by Grateful Dead
“Fins” by Jimmy Buffet
“Cincinnati Fireball” by Johnny Burnette
“Rosie The Riveter” by The Tillers
“We’re Gonna Make It” by Kevin and The Octaves
“Tear In My Heart” by Twenty One Pilots
“Teenage FBI” by Guided By Voices
“Rosie” by Honey & Houston
“Cincinnati, Ohio” by Connie Smith & Bill Anderson
“Come On To My House” by Rosemary Clooney
“Cool Jerk” by Bootsy Collins
“Fever” by The Black Keys
“U Can’t Touch This” by MC Hammer
“It’s Your Thing” by The Isley Brothers
“Gates of Dawn” by Heartless Bastards
“Let Go” Multimagic
“Swallow You Down” by Ass Ponys
“All Of Me” by John Legend
“Tightrope” by Walk The Moon
“Oh, Cincinnati” by the Seedy Seeds 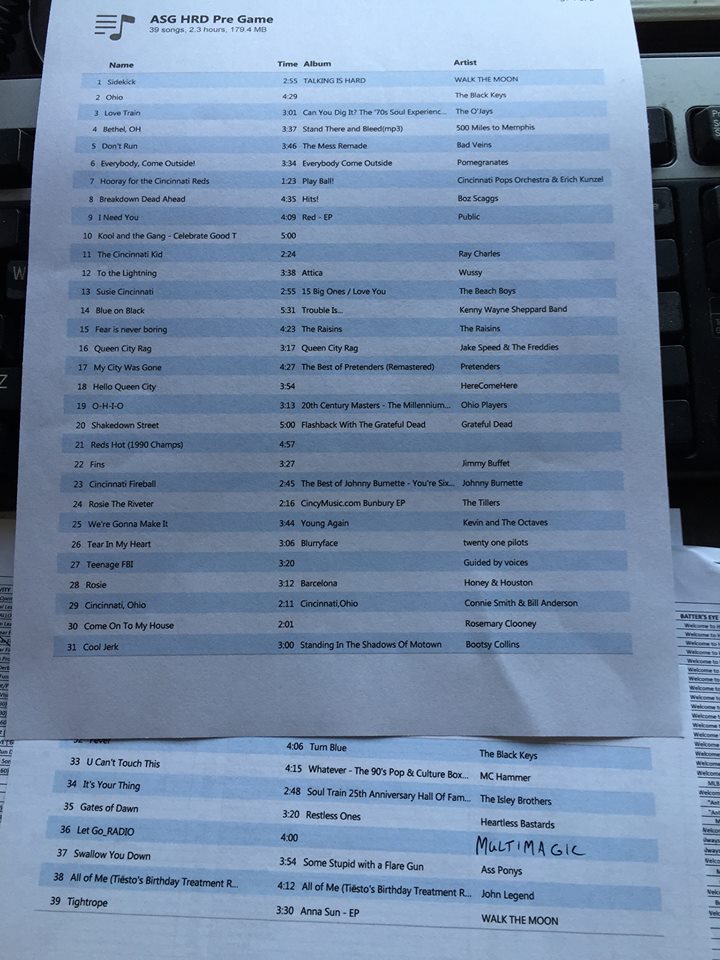 Photos of Pomegranates at The Southgate House Revival on February 6. Photos courtesy of Rubato Photo.

Cincinnati is known for being a baseball town. Win or lose, our Cincinnati Reds can do no wrong. What you may not know about going to see a Cincinnati Red’s game at Great American Ball Park is that a lot of the music that you hear is local!  Aaron Sharpe is not only the Reds DJ; he is...