The phone rings on a late July afternoon inside the tour van. “Hello?” “Hi. Is this Venomous Valdez with Wussy? I’m an Executive Producer with CBS Morning News. We’re interested in bringing the band on the show.” After a short conversation, I sat there a bit stunned. Then I deliver the news to the band. We’re all stunned. A National media outlet wants Wussy. Is this real life?

In April I sent out tour press to the New York media promoting their show in Manhattan. I received a polite “No thank you. We’ll pass this time.” from the Today Show and a few others. The remaining TV outlets did not respond. I’ve mastered the print media for Wussy, but the TV market was proving to be a tough nut to crack. Months later, CBS opened the email. 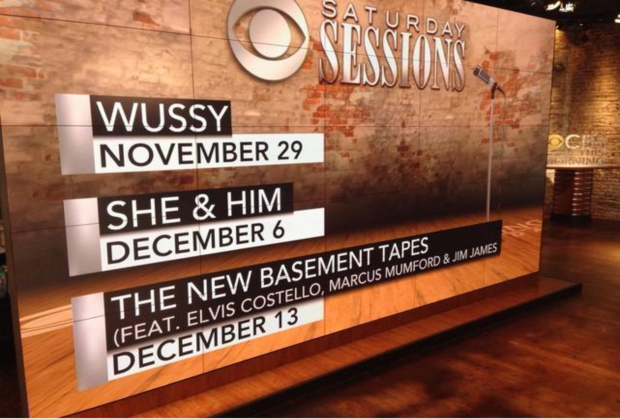 After six weeks of back and forth, I almost lost the segment. The executive producer informed me that a segment like this is very expensive to produce. Since no one in the news room had heard of Wussy, chances are, they don’t want to spend that much money on a band they did not know. In a loud voice I declared like it was the last quarter mile left in a marathon, “Don’t you give up on me! I’m not going to lie and overstate things. That’s not my style. This will be their national TV debut. However, what I have here is a story. A story that most of America will relate to. They’re the perfect metaphor for the struggle of the American class, a later-in-life second chance.” The Producer loved it and said he’ll get back to me. A week later, I get the call they’re taking my idea and kicking it up a notch!

Chuck Cleaver fronted a successful band on A&M records in the 90’s called, Ass Ponys. Along with Wussy pedal steel player, John Erhardt. Fast forward twenty five years and they’re still making music because they have to. It’s in their veins. If they didn’t have that creative outlet, they just might be full on insane, instead of slightly insane (I kid, I kid). Both Gentlemen are in their 50’s and giving it another go. How many Americans are in their 50’s having to reinvent themselves to survive in the marketplace? You don’t have to be in your fifth decade to relate to what they’re going through, at some point in your life; you’ll face the same dilemma.

Wussy isn’t new and is far from an overnight success. This has been 13 years in the making of hard work. They’ve had their share of playing in front of five people. It’s been a thousand baby steps to get this far. A lot of wrangling within oneself, “Why am I doing this? I can’t do this anymore. No one is listening.” I watch Mark, a father of two young boys, struggle with being separated from his children on tour. Yet, they persist. The music keeps coming back to them.

Despite sell outs, all the members need their day jobs to keep the lights on. In fact, the CBS cameras followed them around while on the job. They also filmed their MidPoint Music Festival set when they opened for their former tour-mates, The Afghan Whigs, whose bass player, John Curly is the producer of all of Wussy’s albums.

In October, we were off to New York City to headline CBGB’s Music Festival at the Knitting Factory in Brooklyn. While there, Wussy filmed two pieces for the News segment. First up, was the interview with CBS anchor, Anthony Mason. This is where the surreal weekend began. The interview took place in the famous black room of 60 Minutes. We were told the only other band interviewed in that room was The National. We joked that it had to be a Cincinnati thing. I was immediately impressed when Mr. Mason stated his favorite Wussy song is “Little Miami”. I knew he dug deep in his research. We arrived at 5:00 and we’re told Mr. Mason had to do the evening news at 6:30. We needed to film this segment in 30 minutes. Well, Mark, Chuck and Lisa had him laughing so hard, he lost track of time. At 6:15 someone had to come tear Anthony away.

We piled back on the subway to make our way to Brooklyn to perform at the Knitting Factory. This is without a doubt, one of Chuck’s least favorite things to do, ride public transit. This time, he actually enjoyed it a bit. On the way to Manhattan a handful of high school girls mistook him as their History teacher. They proceeded to quiz us about the elements of the first Amendment. I think Chuck got some pleasure out of this exchange, as he’s usually mistaken for a homeless man in hotel lobbies.

After three hours of sleep, we were off for an early load in at the CBS News studios. We should have been exhausted, but we were running on adrenaline. As we entered the studio, we were wide-eyed kids. The Attica! album graphic adorned 20 some odd screens throughout the room. Hanging on walls, poles and sitting on shelves that housed antiques from radios golden age.

This was Wussy’s first experience with professional hair and makeup for a performance. Lisa, John and Joe had their faces enhanced. Mark, the Les Nessman of the group had a polished head with a cover up of a slight injury he acquired during the show the night before. Chuck with a naturally reddish complexion only needed the Andy Rooney eyebrow comb.

Wussy needed to record three songs; two for airing on TV and one for the website. As the five-some ran through rehearsal for “Teenage Wasteland”, one by one, the crew expressed their surprise. They had no expectations since no one had ever heard of Wussy before 8AM. They each expressed how much they had fallen in love with their music. In fact, Anthony Mason anchored the morning news and stayed an hour and a half after he wrap so he can catch Wussy live. He brought his rock outfit; a pair of jeans and a Black Keys t-shirt to exhibit Ohio pride. Mr. Mason is first and foremost a newsman, and a fine one at that. He holds a genuine passion for music. He wanted a Wussy shirt and I was determined he would not leave till he had one. 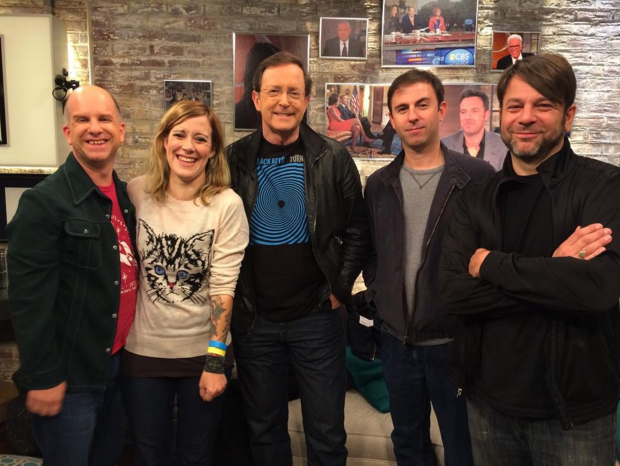 This mission proved to be an ordeal. A nice gentlemen named Tony, alerted Security for an escort. Waiting on my security agent, Tony and I began chatting about his work experience. Tony had worked on The Jon Stewart Show (predecessor to The Daily Show). I asked him the years he had been there knowing Chuck & John performed on Jon Stewart in the 90’s with Ass Ponys. He had! He thought Chuck looked familiar. Tony had loaded in Ass Ponys on the Jon Stewart show and twenty years later, loaded in Wussy. Kismet.

After filming the segment, we were treated to a tour of CBS. We had child-like excitement as we made our way through the maze of studios. The 20 year old us, would have never imagined that one day we would be standing in the same studio as the greats like Edward R. Murrow and Walter Cronkite. Life has its funny ways. 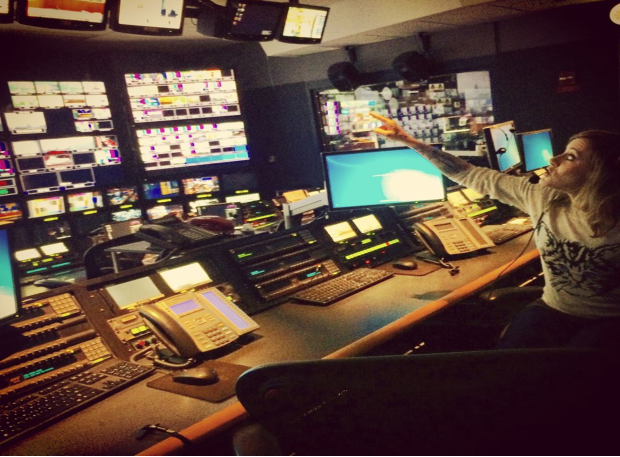 I have worked extremely hard for team Wussy over the last four years. I do whatever it takes to ensure the best show possible night after night. I sometimes think I’m insane, but why do I do it? I believe in the music. I’ve been on the forefront observing how the audience is affected. Nearly every show a fan weeps to “Beautiful”. That’s why I do it. Wussy has an ability to encapsulate a universal vulnerability in a moment in time. The audience grabs on to that emotion and they are moved. 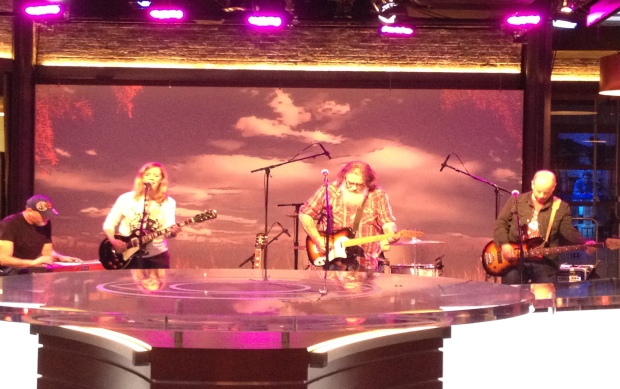 A long time ago, the highly esteemed rock critic, Robert Christgau coined Wussy, the Best band in America not many have heard. Well, finally, that is no longer the case. Wussy is heard.

Did you miss Wussy on CBS, This Morning? Check out the video for "Teenage Wasteland" and "Beautiful"! 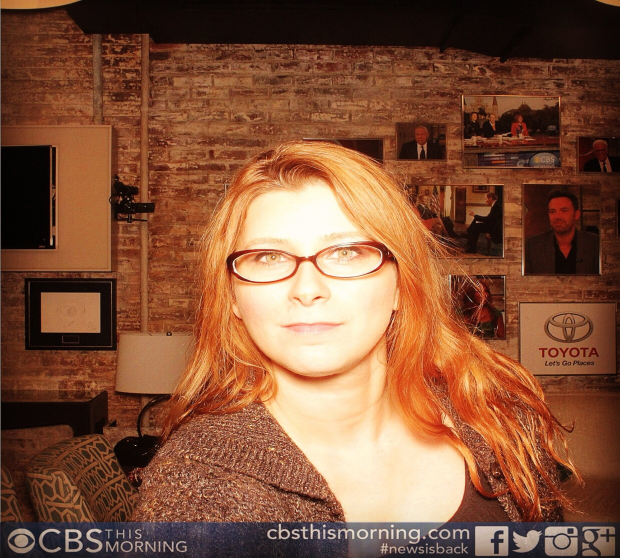 Venomous Valdez became an underground warrior in 1999 broadcasting Indie Rock bands live from their gigs around town on WAIF FM Radio. She went on to spin Cincinnati music for WEBN, WNKU and now, The Project. She also engineers Midpoint Music Festival, Music Director for the Western Southern Open, works at Riverbend Music Center, Bogart's, tours with bands and occasionally writes for us. She has managed and elevated local bands like Wussy, The Sundresses, The Host and many, many more. She is legend.

If you went to a live show in the Cincinnati area this year - chances are that you saw one of our many contributing photographers. 2014 was a year of variety - new venues, new talent, new festivals, and even a few new photographers. We take great pride in capturing the ever changing and ever...

Just like last year, Wussy will be taking the Midpoint Music Festival Main Stage in Washington Park opening for 90’s alt-rock legends from southeastern Ohio (The Breeders last year, The Afghan Whigs this time around). Just like last year, they’ll probably open with “Teenage Wasteland,” a...