Hamilton’s Whimmydiddle Country Music Festival returned this past weekend, bringing a 2-day ticketed event to the downtown RiversEdge Amphitheater. Similarly, to last year’s inaugural offering, the event went beyond the typical idea of country music with a more diverse than expected musical lineup throughout the day on Friday and Saturday.

Friday evening was headlined by two of the biggest names in bluegrass. Billy Strings, the 26-year-old guitar phenom with his progressive and psychedelic stylings took the 8 pm slot while the 80-year-old Del McCoury crooned the crowd to close the evening. Saturday saw another young guitarist, Taz Niederauer, kick off the day before with incredible energy before The Steel Woods, JD McPherson, and Shooter Jennings brought a more typical - yet true to roots - country sound into the sticky evening.

RiversEdge has been steadily increasing the number of shows, both free and ticketed, at the beautiful amphitheater. The setting and infrastructure around the venue is really perfect for one-night headlining shows or multi-day festivals. Next up is David Shaw’s (The Revivalists) Big River Getdown on September 7th.

Billy Strings made their return to the festival after appearing at last year’s free event, and I traveled out to Hamilton to catch the reprise. The group (William Apostol or “Billy Strings” on guitar, Billy Failing on banjo, Jarrod Walker on bass, and Royal Masat on bass) are undoubtedly the hottest ticket on the bluegrass/jamband scene. The group has gone from playing free shows in Washington Park while swinging through Cincinnati just a couple years back to gearing up for a fall tour closing show at the Madison Theater this November. The infectious blend of sincere vocals, traditional bluegrass picking, and long improvisational jams has the quartet’s sophomore album Home (September 27; Rounder Records) as one of the most anticipated album releases of the fall.

Billy Strings played two songs off the new records -- the bluegrass romper “Hollow Heart” and the more modern and cerebral “Taking Water” that featured spacey guitar effects behind haunting lyrics that will undoubtedly set the tone as the opening track on the new album. 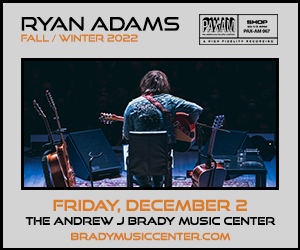