ENTER TO WIN A PAIR OF 2-DAY PASSES HERE! 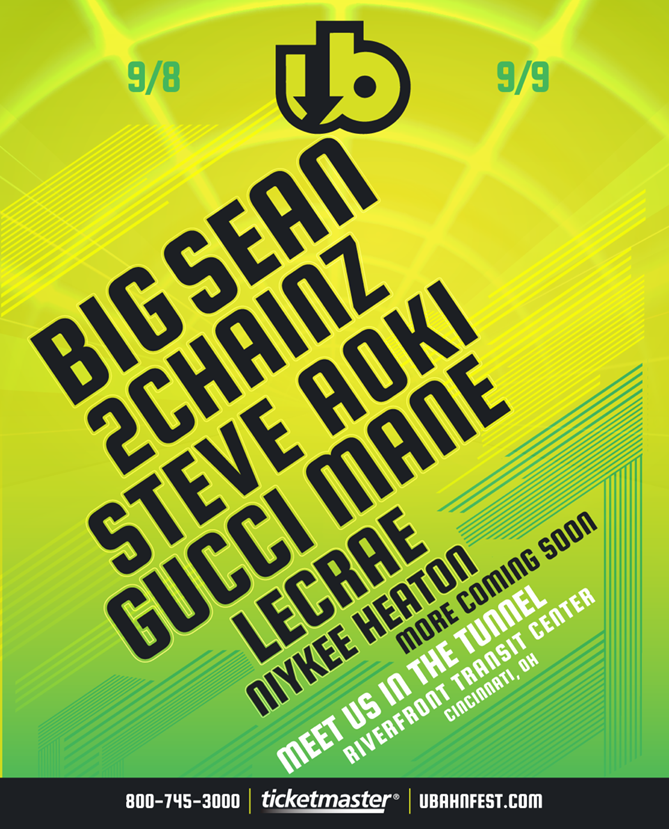 AGAR and Nederlander Entertainment have announced details for the fourth annual UBAHN FEST set to take place this September 8th and 9th in downtown Cincinnati underground in the Riverfront Transit Center. UBHAN FEST will feature live performances over two days on two stages including performances by Big Sean, 2 Chainz, Gucci Mane, Steve Aoki, Lacrae and many more that will be announced in the coming weeks. Tickets, $99 for the early bird Two-Day Pass and $250 for the limited availability VIP Pass and are on sale now at all Ticketmaster locations, Ticketmaster.com, and by phone at 800-745-3000.

“UBAHN is so much more than a music festival that happens to be underground, “said Josh Heuser Founder of AGAR and UBAHN. “It’s a true celebration of Music and artistic expression that plays out in a space as unique as the festival itself.  In the tunnel, skateboarding demos, street art installations, music-inspired merchandise, light activations and two stages of carefully curated regional and national acts all combine in an amazing experience that reflects the diversity and passions of our audience. That’s what makes it so special and what keeps us coming back with new and different ways to please the crowd,” said Heuser.

“We are excited to continue our partnership with AGAR and the UBAHN Festival,” said Nederlander Entertainment Vice President Steve Liberatore. “The eclectic setting of an underground tunnel with overflowing artistic expression makes this an unmatched cultural experience. The unique UBAHN space allows us to bring artists to Cincinnati who otherwise would not have a proper setting to perform while promoting these artists and the genre in this market as a whole. We look forward to growing the AGAR vision of UBAHN into something truly spectacular.”

Tickets, $99 for Two-Day Passes and $250 for VIP Passes, are on sale now at all Ticketmaster locations, www.Ticketmaster.com, and by phone at 800-745-3000. More information can be found at www.UbahnFest.com. The VIP Pass allows access to optimal VIP locations at the event, as well as event entry on both nights. Two-Day Passes will increase in price this summer and single day tickets will be available at a to be announced later date prior to the event. Tickets are available HERE.

If you would like to perform at Ubahn this year you can submit for consideration here.