The Forecastle Festival in Louisville, KY have announced that LCD Soundsystem, Weezer and Odesza will headline this years festival July 14-16! Cage the Elephant, PJ Harvey, Run the Jewels, Nathaniel Rateliff and the Night Sweats, GRiZ + Dozens More Round Out First Wave of Artists. 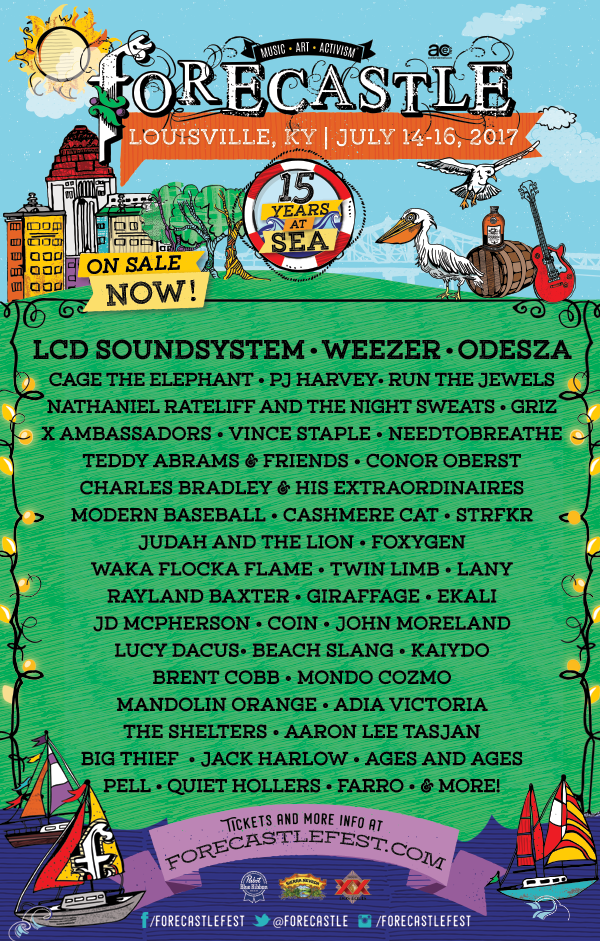 Embarking on its 15th year, the Forecastle Festival will return in 2017 led by celebrated dance rock legends LCD Soundsystem, alt-rock royalty Weezer, and the infectious grooves of electro-pop duo Odesza. The three-day music celebration will take place July 14–16, 2017, at the award-winning Waterfront Park, situated on 85 acres of green space on the banks of the Ohio River framed by the skyline of downtown Louisville.

Additional acts include Cage the Elephant, PJ Harvey, Run the Jewels, Nathaniel Rateliff and the Night Sweats, GRiZ, X Ambassadors, Vince Staples, NEEDTOBREATHE, Teddy Abrams & Friends, Conor Oberst and many more. A full list of confirmed artists from the initial lineup can be found below. A number of additional acts will be announced in early 2017.

Often referred to at the fourth headliner, bourbon will play a prominent role at the festival. The Forecastle Bourbon Lodge and Gonzo Bar will return with a full lineup of bourbon offerings from across the

General Admission weekend passes are available now at ForecastleFest.com and all Ticketmaster outlets with a limited quantity starting at $149.50 + fees. VIP weekend passes include front stage viewing areas, an air-conditioned lounge, branded merchandise, access to the Bourbon Lodge and more. New to 2017, Forecastle will offer a General Admission Plus option, featuring exclusive, air-conditioned lounge access, a private bar and special entrance lines to the festival. Payment plan options for all ticket types are available now. Full details can be found at ForecastleFest.com.

Commonwealth, bourbon education, bourbon-inspired culinary experience and much more. Forecastle’s wildly popular Bourbon Lodge memberships can be purchased in advance through Ticketmaster for $25 plus applicable fees.

The Kentucky Landing will return and feature a variety of local craft beers, food trucks, businesses and a selection of non-profit organizations and craft vendors selling Kentucky-made goods.

Highlighted in Rolling Stone as “One of the Coolest Festivals in America” and acclaimed by Garden and Gun as the “Greatest Show for Earth,” the Forecastle Festival has evolved from a small community event into one of the country’s premier festival destinations.

About AC Entertainment:
AC Entertainment is internationally recognized as an innovative leader in creating, producing, booking, and marketing first-class live entertainment experiences – from festivals and concerts to all types of special events. As producers of the Bonnaroo Music and Arts Festival, Sloss Festival, High Water Festival, and Big Ears Festival, and through the 1,000+ concerts they present nationally each year, AC takes special pride in those unforgettable, spine-tingling moments that everyone remembers, long after the lights have come up. For more information on AC Entertainment, visit ACEntertainment.com.