Some bands don’t need to reinvent the wheel. When The Darkness landed on the airwaves back in 2003, they were a big, colorful throwback to the heyday of 1970’s glam-rock. Original? Hardly, but it was pastiche done better than anyone else--often besting the very bands they were channeling. Permission to Land was well-written and catchier than anything, and its timeless single “I Believe in a Thing Called Love” led to blockbuster sales and arena tours in their native England. Tack on a sizable cult following here in the States, and golden-voiced frontman Justin Hawkins became a bona-fide international rock star.

Thirteen years, one breakup, one reunion, and three albums later, they brought their Back in the U.S.S.A. tour to Bogart’s on Tuesday night. Hawkins took to the stage in a candy cane-striped onesie, and the quartet launched into “Barbarian” off of last year’s Last of Our Kind. As at the peak of their fame, Hawkins is still joined by younger brother Dan on rhythm guitar and bassist Frankie Poullain. Since 2013, the group is rounded out by Rufus Taylor--son of Queen’s Roger--on drums, tying The Darkness directly to the legacy of an act to which they’ve long been compared. I understand the parallel to an extent, given Hawkins’s theatrical flair and dynamic voice, but onstage it’s all Les Pauls blasting through Marshall stacks. T Rex and Thin Lizzy are where my mind goes.

They may have started with a newer track, but most Tuesday’s set was rooted firmly in the past. 11 of the set’s 16 songs were drawn from their first two albums, and the enthusiastic crowd ate it up. Every single setlist entry incited a singalong, with Hawkins gleefully pogoing and gyrating across the stage, ever the ringmaster. It was obvious from the get-go how much fun these guys were having, and it’s particularly striking how well they toe the line between poignant and pisstake. These are often funny songs (the line “One way ticket to hell and back” is one the best bits of metal satire since the Spinal Tap days), but the whole thing wouldn’t work if there wasn’t fundamentally good songwriting behind it, and they have that in droves. “Black Shuck” invokes a spooky bit of English folklore, “Love Is Only a Feeling” is the power ballad that 1986 truly deserved, and “English Country Garden” unexpectedly set the stage for the likes of piano-rockers like J. Roddy Walston.

Of course, we got to hear “I Believe In A Thing Called Love.” Thirty years from now, it will be the song The Darkness is remembered for, and deservedly so. It’s perfect power pop candy in the vein of Cheap Trick and thankfully, they don’t seem to have tired of it. They left the stage to rapturous applause, and returned for a ripping version of “Concrete.” Hawkins donned a fan’s Bengals cap, quipping, “We’ll support your local sports endeavors in return for your support of our international music project.” The Bogart’s crowd was all-in. Hawkins plugged in his white Gibson one last time and fired up their long-time showstopper, “Love on the Rocks With No Ice” to close things out. He led the crowd in call-and response singalongs and soloed from the middle of the crowd, all with the full force of the blinding walls of white light that made up their stage production, before tossing some picks into the crowd (this was a frequent occurrence) and heading off into the night. The biggest days of The Darkness may be behind them, but they made it abundantly clear on Tuesday that they still have plenty to offer.

Both of the night’s opening acts put on noteworthy performances. Columbus’s The Skulx, featuring Alex Nauth of Foxy Shazam on lead vocals and trumpet as well as members of Cadaver Dogs, riffed their way through 25 minutes of swaggering, manic rock, including a magnificent cover of ELO’s “Long Black Road.”

They were followed by RavenEye, hailing from Milton Keynes, England and fronted by established solo artist Oli Brown. They traffic in heavy, fuzzy blues licks with no frills (except the occasional solo performed perched on the bassist’s shoulders). Their sound is nothing new, but Brown’s piercing vocals instantly evoke Chris Cornell, and it’s all presented with such lighthearted vigor that you can’t help but go along for the ride.

Check out our photo gallery from the show HERE! 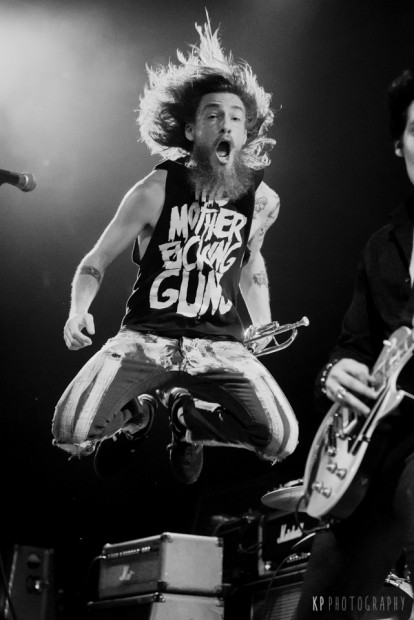 The Darkness Setlist:
Barbarian
Growing on Me
Mudslide
Black Shuck
Roaring Waters
Givin’ Up
One Way Ticket
Love Is Only a Feeling
Friday Night
English Country Garden
Every Inch of You
Get Your Hands Off My Woman
Stuck in a Rut
I Believe in a Thing Called Love

Encore:
Concrete
Love on the Rocks With No Ice

Photos of The Darkness with Raveneye and The Skulx :: Courtesy of KP Photography