For Serenity Fisher and the Cardboard Hearts, it’s record release night, the culmination of 13 months’ hard work, and the PA isn’t working. “Yeah, there’s just nothing coming through,” drummer Matt Halvorson tells me over a plate of french fries in the high-ceilinged upstairs venue at Molly Malone’s in Covington. “We’ve got the main mixes running through the monitors. It should work.” Onstage, Cardboard Hearts cellist Michael Ronstadt is soundchecking for his own opening set, and their on-the-fly fix seems to be working. A frustrating sidetrack during an otherwise celebratory evening, but this is not a group to shy away from a challenge.

The source of that celebration, Carousel of Love, came as the result of a successful crowdfunding campaign followed by an intense recording process in Tucson, Arizona. The LP has received accolades from the likes of Blood Sweat & Tears founder Steve Katz (for whom Fisher and company open at Ludlow Garage on Saturday), as well as Ronstadt’s legendary aunt Linda, and all with good reason. It is an immaculately rendered album full of cleverly constructed songs, richly textured arrangements, and virtuosic performances. Sonically, it draws on everything from chamber pop to Fiona Apple to Fisher’s own experience writing left-of-the-dial musicals for the Cincinnati Fringe Festival, with a Cyndi Lauper cover thrown in for good measure. It’s unlike almost any other album that came out last year, locally or otherwise, and it took a long, arduous road from conception to fruition.

Serenity Fisher started writing songs while she was studying Musical Theater at Kent State. While in a music theory class, she learned to play Fiona Apple’s “Never is a Promise,” and it sparked a connection between her piano playing and her love of poetry. She moved to California after leaving Kent in 2006 and wrote and recorded her first album Watercolor Harmonies. One of the first things that stands out when you hear Fisher sing is her versatile, expressive voice, reminiscent of the complex dynamism of Joanna Newsom, and that’s not something that came easily.  “What my voice, in my own music, sounds like is something that I’ve worked on,” she says. “It kind of took a while to find it, and I feel like there was a point where it felt like I did find it, and I started to find what my vocal style was. As you grow, as you change, as you evolve as a person, you figure out how to express that.”

Fisher grew up surrounded by music. She recalls being drawn to musicals from an early age, and attended a performance of Les Miserables at the age of four, which she pinpoints as a particularly formative moment. Her father (and bandmate) Bobby is a professional musician here in the Tristate. Bobby started out playing summer pool parties at the Jewish Cultural Center in middle school with a band called The Intensities, which featured Gary Dick, now the owner of Gary’s Classic Guitars in Loveland. He’s been a fixture on the Cincinnati scene ever since, a member of The Smith Brothers, Melange, Coyote, and a prominent solo and studio performer. “I’ve managed to make a living as a musician,” he says, “and when you do that, you do whatever comes your way.” He’s done session work for everything from advertising jingles to gospel records, although he says that those gigs have largely dried up. Recently, he’s largely pivoted to production work. 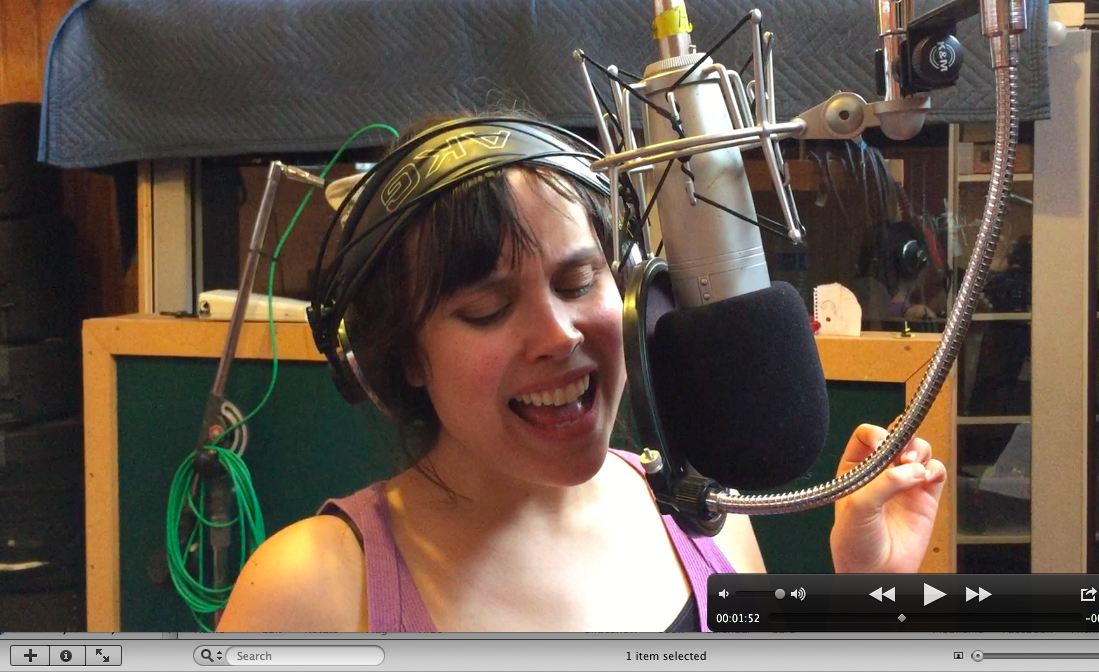 The pieces of The Cardboard Hearts started to come together when Serenity moved back from California at the end of 2007. She was encouraged to start playing shows on the coffee shop circuit, often joined by Bobby on guitar. She met Halvorson, and they started playing shows as a duo about a year later. Halvorson, who also plays with Cincinnati country artist Noah Smith, is an inventive, creative percussionist, with a colossal collection of instruments at his disposal and a background in ethnomusicology. Onstage, a giant spiral crash cymbal towers ten feet over his kit. “I think that, for the band, Matt is really a driving force,” says Fisher. She credits his organizational skills with the album’s release timeline, and he created a detailed deadline checklist for the whole process.

Joined by Halvorson, the Fishers would play shows in different configurations, but Serenity still had a vision for new directions. “I always really wanted to have strings. I could just hear strings in my head, but unfortunately you can’t broadcast what you have in your head.” She sought a cellist, and a friend recommended Michael Ronstadt. At the time, Ronstadt had moved away after completing a Master’s at the College Conservatory of Music, but returned to Cincinnati frequently and became a regular collaborator. “I guess there was a point where I felt like I’d done enough of the solo thing,” says Fisher, “and we started to do shows together.” For one of those shows, Fisher invited her childhood friend Rose Reidmiller Gowda (whose mother was Fisher’s piano teacher) to join them for what was supposed to be a one-off, but it turned out to be a perfect fit. Although no one can quite triangulate the point where the name stuck, The Cardboard Hearts monicker came soon after.

Ronstadt also comes from a deep musical background which extends far beyond his aunt, country-rock legend Linda Ronstadt. His father ran Thundering Rain Productions in Tucson, AZ, and he was steeped in the recording process from an early age. “That all influenced me and my brother to pursue music as something more than just a hobby. And of course my Aunt Linda made a pretty good career out of it. So growing up, I was like, ‘This is a legitimate thing, this is what I want to do.’” His brother Petie amassed gear working in bands of his own, and used it to build LandMark Sound Recorders, where the Cardboard Hearts recorded Carousel of Love, which Petie co-produced, engineered, and mastered. “He worked his rear end off to do this, and it’s the best work he’s ever done.”

Ronstadt isn’t exaggerating: Carousel of Love sounds incredible, all of its parts perfectly balanced and recorded. The knocked it out in during a long set of sessions during the winter of 2014-15, during which Serenity contracted bronchitis and had to return to record lead vocals three months later. The sessions were partially funded by an extremely successful crowdfunding campaign on IndieGogo, which ended just shy of $9,000. Serenity is quick to brand the album as a group effort. “I wrote the songs, I wrote the music, I wrote the lyrics, but so much of the arrangements that you hear on the record are very collaborative...we just start playing together. Almost all of the songs came alive in the studio.” Halvorson particularly credits Bobby’s ear for production and arrangement, but Ronstadt turns everything back to Serenity’s material. “The framework and foundation of what she brings is so complete, and we can either add a little bit to make it shine, or we can really dig deep and change things if we want, but the foundation is so strong.” 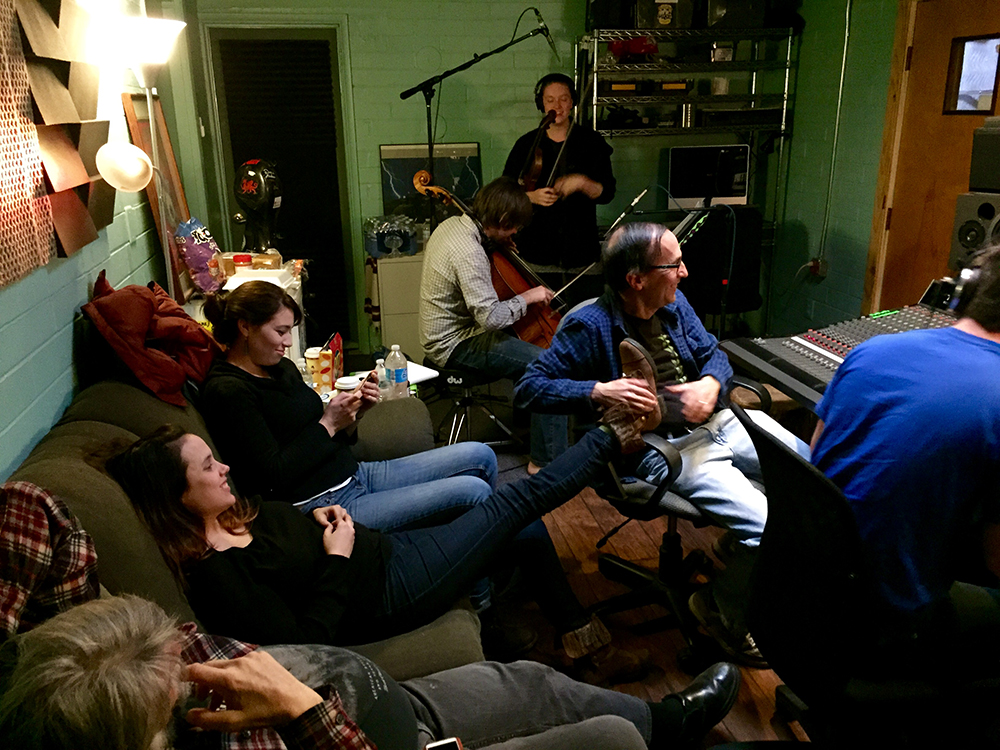 All through Carousel of Love, that early dramatic influence pervades. “Musical theater to me is just a magical world. The type of artist that I am, there’s just something theatrical about it, and that’s not something to be resisted, that’s something to cultivate and let it come out however it comes out.” Album centerpiece “Fleur D’Vortex” is a dense suite-like fantasia that showcases her voice and lyricism: “I am not afraid to live truthfully/It's the difference you see between you and me/Covet my light/Yet fear me.” There is a fairy-tale element to many of the songs, and we meet bears, caterpillars, and rabbits, but like a classic fable, there’s a dark complexity all of it. All across Carousel of Love, Fisher teeters masterfully on the razor’s edge of that dynamic. The title track lurches woozily out of the gate, vertiginous strings soaring above the fray, and “So Far From Oh Well” tiptoes melodically before crashing into its cacophonous chorus. “I am doing fine, but I am so far from oh well/I can’t find my way out of the spell.”

Smack dab in the middle of the record is a striking cover of Cyndi Lauper’s classic “Time After Time,” undeniably recast and transformed in Fisher’s own image. She also considered including “Unchained Melody,” which she identifies as her favorite song, but “Time After Time” just fit right into the rest of Carousel of Love. She says she spent a great deal of time developing the arrangement, moreso even than her originals, taking full ownership of the 80’s hit.

The record is also capable of quiet intimacy, too. On penultimate track “Sonnet #12” Fisher muses on the titular Shakespeare poem in relation to a past relationship: “I really loved him/I thought he loved me too.” The line is uncomplicated, but its delivery bears tremendous weight. “One of these days I’ll write a love song/Someone will stay and life will go on.” The atmosphere remains quiet and heartfelt on album closer “Maggie,” written in tribute to a dearly departed dog and punctuated by Bobby’s melodic ukulele. It is the final chapter in a record that evokes deep, complex emotion without ever stooping to cheap sentimentality, buttressed by expert musicianship and clear, sharp production.

The Cardboard Hearts weren’t the only ones releasing a record at Molly Malone’s last October; Ronstadt’s own album, Foolish Fox, finally reached the light of day as well. It was a long, collaborative work, recorded in pieces in four different states. His brother put down rhythm tracks in Tucson, Michael recorded vocals in Cincinnati, and all of the other pieces came together in Ambler, PA with producer and songwriter Rick Denzien. Almost by happenstance, the two-year project reached its completion at the same time as Carousel of Love. “I love collaborating, it takes me places I don’t always go otherwise, so I figured why not have an album with some of my favorite songs with some co-writes and originals, and I think it worked.” For his opening set, Ronstadt was joined by the rest of his bandmates to round out the full sound of the recordings.

And then, the main attraction. After an intermission, the full quintet returned to the stage to perform Carousel of Love in its entirety, and the Cardboard Hearts prove to be just as formidable and nuanced onstage as they are on record. Each member is highly attuned to the other four, and even through a hamstrung sound system, the loud crescendos and quiet valleys are delivered with equal care. The string players preside over stage left, with Ronstadt belting out powerful backing vocals. Bobby sports a fedora opposite them, coaxing myriad tones from a Stratocaster, and Halvorson’s percussion labyrinth at the back. Front-and-center, triumphant, stands Serenity in a patterned dress and boots, gleefully pounding out her new record to the packed crowd, and the warm smile never leaves her face.

Nearly six months after Carousel of Love was introduced to the world, the band hasn’t lost momentum. Serenity is a regular at The Listing Loon in Northside, and the band has been tacked on to several bills at the Southgate House Revival and played dates across the midwest. But the band is particularly excited about sharing a bill this weekend with Katz, who first came across “Carousel” online. Says Katz, “There are certain tracks that just catch your ear. It happens less and less frequently these days, maybe once or twice a year…. Unusual, interesting, and in a class by itself, ‘Carousel of Love’ was a delightful departure from most of the ephemera that you find on the internet.” Far from ephemera, Carousel is a gem waiting for a broader audience. This weekend’s show is just another step in finding it. 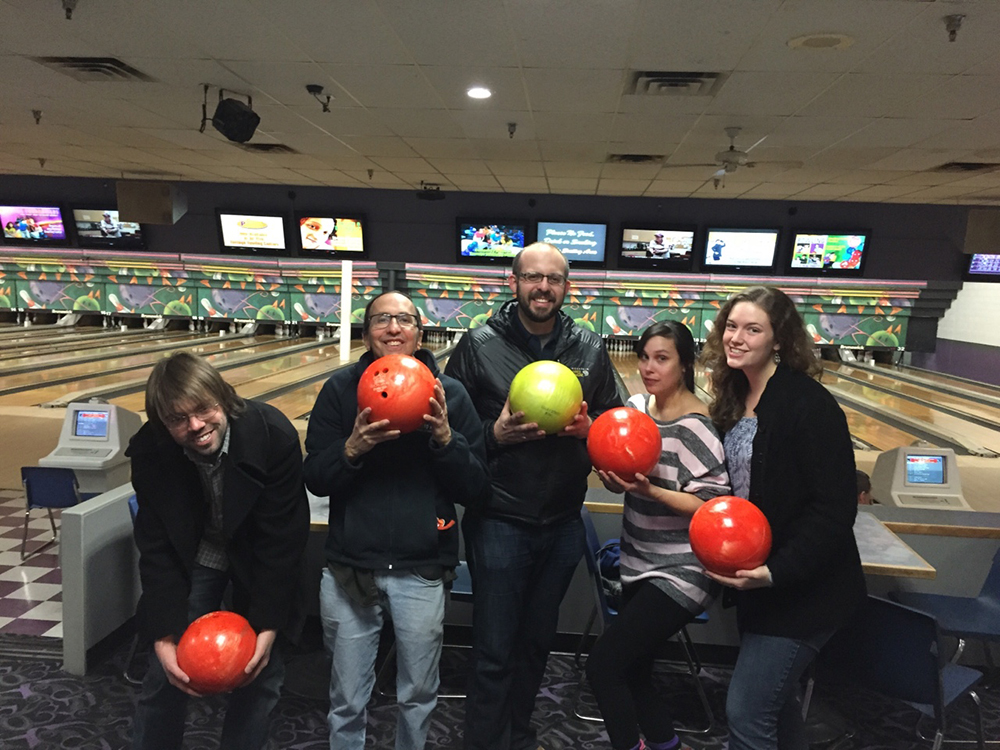