The Westies are a band that unabashedly confronts the trials of the inner city heart with a slow burn delicacy that juxtaposes many uncomfortable subjects with a tender and elegant beauty that is rare in the current music landscape.

After just avoiding a would be 3-6 year prison sentence (which McDermott is uneasy to discuss) and a spiraling life, McDermott’s chance meeting with Horton would change the course and the trajectory of his life. What would follow would be a steady climb from the trenches. With a “sleeves rolled up” songwriting approach, that while delicate and tender, matches with equal measure, the brutality of an honest eye and a turbulent life.

The Westies album West Side Stories is a song cycle inspired by the real life Westies, “a ruthless gang of Irish mob punks that ruled Hell’s Kitchen in the 60’s and 70′s". The gangsters serve as a metaphor for the dark side that lurks inside us all. The unexplained forces that cause internal struggles, destroy relationships and leave us clinging to love as just a memory.

The Westies played the NPR show Mountain Stage in January with Guster, and Robert Earl Keen! Make sure you tune in around March 25th for the episode HERE!

We sat down with Michael McDermott of The Westies prior to their show Friday, March 4th at The Southgate House Revival.

Give us some background on The Westies…
The Westies were born in Nashville TN in December 2012...My wife & I, along with some friends, booked 3 days in East Nashville and what transpired was something fresh and exciting and something that we couldn't ignore.

What can one expect at a live show?
It's a blend of disquieting heartland music, challenging and stark, at times joyous, at times bleak and desperate. It lives on the borderline, where things can turn on a dime....it rocks pretty hard at times...and sometimes as quiet as a church mouse...ok, maybe a drunken church mouse, who has had a little too much wine from the sacristy.

Does the name of the band correlate with the “would be 3-6 prison sentence?
I lived in NYC and ran in Hell's Kitchen in my hell-raising days...The Westies were legends there...the gang had already been dismantled when I was there, but was also inspired by the TJ English book "The Westies" which told the real, gruesome story of the history of The Westies.

Tell us about the dynamic between the band...
It's in a great space where we know each other well enough that we surprise each other, but comfortable enough to count on each other. In true Westies fashion, we have each other's backs.

What is next for The Westies?
Our 2nd record was out Jan 29th (Pauper Sky).  We also recently played in West Virginia for the nationally syndicated NPR show Mountain Stage! Other than that, shows, shows and more shows.... the circus never stops a rollin'.....

Tell us about the NPR Mountain Stage show!
It was quite the adventure actually. It was the huge winter storm that ended up cancelling 11,000 flights on the eastern seaboard. Some of us were flying out there but those flights were cancelled so we ended up driving out. I felt like Clooney in the movie Perfect Storm, we knew we were headed into danger but we went anyway. We were the only car on the road for about 150 miles, it was literally deserted. We made it safe and sound. The sold out show, was only attended by half of the crowd. Glen Frey had just died and Guster, Robert Earl Keen and Ourselves with the House band did, “Peaceful Easy Feeling”. Robert Earl Keen was kind enough to serve as our human music stand and held the lyrics in front of our faces as we sang. A pretty cool moment.... 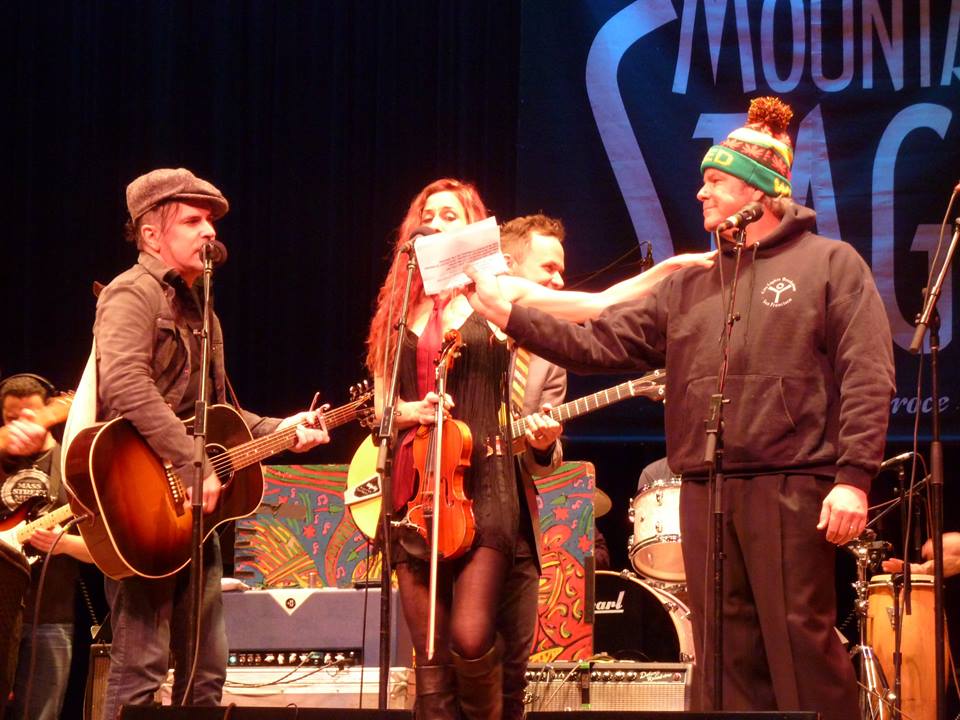