Pollstar posted their annual year end Top 20 Worldwide Tours yesterday, and it was no surprise that superstars such as One Direction, Justin Timberlake, and The Rolling Stones dominated the top ranks. The most successful artist of the year (determined by gross box office receipts) was One Direction with a whopping $282.2 million in ticket sales. You can view the full report here. 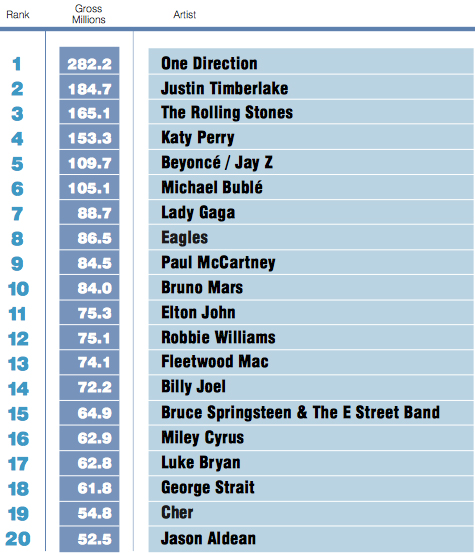 So, the competitive nature in you is probably wondering how many of those tours had a stop in Cincinnati in 2014. We wondered the same thing, and the answer is six (seven if Cher would not have rescheduled and ultimately cancelled her show). Of the artists above, Beyonce / Jay Z, Michael Buble, The Eagles, Bruno Mars, Bruce Springsteen & The E Street Band, and Jason Aldean visited the Queen City this year. Columbus saw 10 of the top 20, Indianapolis saw 3 of the top 20, and Louisville saw 7 of the top 20. Compared to last year, this is an improvement for Cincinnati. We only saw 2 of the top 20 artists in 2013.

What does this mean? Probably nothing, but it's an indicator of the health of the local music economy nonetheless. Often, attracting these type of shows is the result of history in the market, strong radio support, and a general willingness of the market to spend money on entertainment. The number of these shows that came to Cincy increased by 20% and we weren't in last place in the region, for what it's worth!